January 20, 2017 – As former President Barack Obama packs his last box into the U-haul, America throws herself at his feet and begs him not to go. She arrived at the White House early Friday morning holding a boom box playing Chicago’s “If you Leave Me Now”, changing the words from “Baby please don’t go” to “Barry please don’t go”, in a last ditch effort to keep the President in office. He’s not convinced, though. And Obama helps America to her feet before he goes back to have a final look around to make sure he didn’t leave anything. 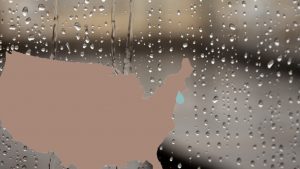 For the past 72 days, America tried to figure out exactly just what went wrong. But, if you are looking for a single event, look no further than November 8th, 2016. On this day, America drunkenly hooked-up with Donald J. Trump, because he “paid at least some kind of attention” to her, though she admits it wasn’t the right kind of attention. She didn’t think about the consequences or all the new STD’s she would acquire. It was a “desperate and reckless attempt to get President Obama to notice [her]”, she admitted over a bowl of half-eaten ice cream.

And since that night, America has been trying to make it up to Obama in any way she knows how. “First I got mad. You know it takes two to make a relationship fail. And I thought lashing out would change things, protesting in the streets, beating people up. But it didn’t help my broken heart”, America said as she looked forlornly out her rain-covered window.

Her next attempt at reconciliation was trying to do all the things Obama wanted to do, including hanging out with his best friend, Joe Biden. “I spent a lot of time trying to show him how cool I thought Joe was. All those memes – that was me! Just trying to be ‘one of the guys’. But of course that just made Joe and Barry closer.” 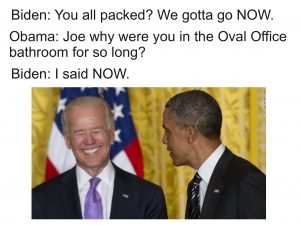 “I created these” – America

She admits that it was her idea to give Biden the Presidential Medal of Freedom. “I said it in the middle of a fight. I screamed at him, ‘Well if you love Joe so much, why don’t you give HIM the Presidential Medal of Freedom.’ It was just one of those stupid things you say,” she says as she goes to put on that old brown sweater Obama left at her house.

When hanging out with the guys didn’t work, America tried to use nostalgia. “I just wanted him to remember the good times. You know. We had so many good times. Like when he took down Osama Bin Laden. That really brought us all together.” But even nostalgia didn’t work.  It was really over.

“It’s hard to admit it’s over. I’m going to miss him so much. He was so funny and good with kids and he tried to make sure everyone was taken care of. I guess when I hooked up with Trump, I knew it would really hurt him,” America said with tears streaming down her face. And now America will have to learn to live with this mistake, for the next four years.

As Obama walks back towards the moving truck he turns to hug America goodbye. “You know legally this was going to happen, right? I can’t serve more than two terms” he says, “I had to go.”

“I get what you’re saying,” said America, “there’s nothing either of us could do.”

“No,” said Obama, “this whole thing is all your fault. Ya’ll fucked up.  Good luck.”