Another week, another ANTM

Remember that show, Everybody Hates Chris? Well this episode starts out the opposite of that because EVERYONE MISSES KRIS! Because she’s great and sweet and the judges hated on her sexy. Miss ya Krislian.

India then promises to never be in the bottom 3 again. At least she’s realizing she’s riding the middle. But I dunno about her ascending.

Paige says Kyle’s the “comeback kid” which, given the history of the show, doesn’t make sense but we’re in the world of #alternativefacts now so sure. Kyle responds by saying she has to get “model serious” which I assume means lots of duck faces and smizes but who am I to judge that. Tyra? …oh wait, no. No Tyra. NO TYRA! But don’t worry BECAUSE KYLE RELIVES THE BEST TYRA MOMENT OUT THERE! THE BEST ONE! TYRA COME BACK! First Tyra, and then Obama…

Anyway, Court’s like “I got a bunch of space in my closet and I hate Binta cause she’s a fuckin’ boss threat” (in not so many words) to Marissa. Marissa says she’s “worked her ass off” to have some wiggle room in the house which I know she means by her modeling but, I mean, she’s also hooking up with another roommate so this could probs be misinterpreted. Either way, she’s definitely looking to take space away from Binta.

And Binta hates it.

Remember the fun times Kyle and Paige were just having with #alternativefacts and quoting Tyra? Binta and Marissa steamroll right over all of it. VROOOOOOOOM where vroom is arguing.

Is it just me or does she seriously just have her eyes closed for a third of these things now.

She’s all “keep a beat” so obviously dancing. This was the lamest wording of one too. Great. THEY’RE GETTING WORSE.

Hey, Paige was a competitive dancer. You didn’t see that coming? Then you haven’t been watching the same show I have.

Stacey McKenzie is BACK!

And she’s with Chris Grant, Beyonce’s personal choreographer. HE TOOK A BREAK FROM THE FORMATION TOUR FOR THIS?! Oh boy.

“Dance is modeling with music.” – philosophy by Chris Grant

Ooof Tatiana tries to throw shade at Paige saying she screams musical theater but, ya know what, ok. Maybe that’s only awesome to me and not Chris Grant, choreographer to Beyonce. But MUSICAL THEATER IS AN ART. God I wish I could sing.

OH! WAIT! Chris Grant RECOGNIZES! And he loves that she’s adding her own “isms” to the dance. Take that Tati!

Chris Grant Challenge is to come up with their own signature move to end the routine but they still have to think “model”.

Ok Side Note: I know we’ve seen Marissa with that bandana tied around her head in past confessionals but here’s a little confession of my own: I thought it was a tiny hat. Probably should get my eyes checked. But also, really wish it was a tiny hat. 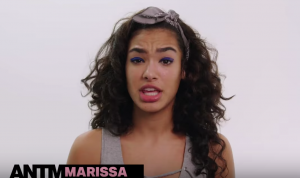 Tatiana hit it dead on (sorry for the shade before this from me), Marissa looked like a fool, Cory Anne fucked up, Kyle was awkward AF, Court complains, India keeps in the middle, Paige did musical theater face.

Mmmkay so obviously Tatiana. Who is now a face of a campaign for Gypsy Sports. Girl keeps winning challenges but not best photo.

Paige gets back to being a sweetheart and offers to help Kyle who, like a boss, wants to practice! But Marissa tries to make her feel lame about it. Mmmmm is she doing it on purpose?? Or is she just young?? I DON’T KNOW I DON’T KNOW I WANT TO KNOW.

Tatiana rolls up like “I got this.” And girl probably does.

Well, Rita’s on set in Harlem with the girls. As is Drew. And a guy named Director X. Like Professor X but instead of training X-Men, he trains models. And this is the extent of my knowledge on the X-Men.

After a super calm speech about what’s gonna go down, Rita says “he can seem scary.” That was scary? Well, I guess I’m skewed by the Sauv Blanc in my veins so maybe it was. Ok, Courtney’s intimidated and she’s usually like “Fuck y’all I’m Court.” So I’ll be intimidated now.

Rita gives a pep talk and even that is a sleepy mess. And then they had her do shitty ADR to say she was off to a photo shoot. Rita. You seem like you could be fun. What. Am. I. Missing?!

Stacey rocks up though and gives an ACTUAL pep talk that I like. Redeemed. And then Marissa gives her sass. Nah. Do not do it.

No worries tho. Stacey shuts it down.

AND NOW WE DANCE

The shoot’s got a biker, a hydrant, double dutch and one take.

Tatiana and Paige go fine with no problems. And then there’s Courtney saying , surprise, she’s allergic to something. She makes the makeup artist take off lipstick! Oh girl.

Hahahaha MARISSA CALLS HER OUT!! The chapstick doesn’t have any almond oil in it! Court shouldn’t be having a reaction. I have a bad (good for drama) feeling on how this is gonna play out.

Then Binta defends herself in the most monotone voice about how she’s playful and energetic. And then was robotic in the video. Still love you boo.

Courtney misses all of her marks. Due to the fake news that there wasn’t almond oil in the chapstick or because she was worried she wouldn’t make the X-Men. Poor Paige is the sweethearts of sweethearts and is the only one that pops over to comfort her. Court, this may be the episode you lose me. It took me THIS LONG.

India, however, brought it. BROUGHT it. Clap clap clap.

Kyle looked like that episode of Seinfeld where Molly Shannon doesn’t move her arms when she walks. Except it wasn’t funny. I just felt bad for Kyle.

Stacey takes Marissa aside after the shoot to school her again, ’cause she needs it! And then to us, the audience, is like “whatever, I tried. I already know I got it. Girl needs to shape up.” Rita, take note please. THIS is the good stuff.

BACK AT THE HOUSE AGAIN

Kyle is nervous, and she should be, because that was awful. And Marissa apparently doesn’t give AF. Ugh Kyle, KYLE! The only thing that would make this moment worse would be—

What is this outfit and hair Rita?! And so many makeup pans! SO MANY! It doesn’t help the outfit.

“This week was all about movement.” I THOUGHT THAT WAS LAST WEEK RITA! Whatever. Let’s go to tape.

The judges call out Marissa! And then they call out the hat move! Yaaaaas.

Cody didn’t do it great but she doesn’t strike me as a music girl. She strikes me as a badass model tho. She’s not going anywhere.

Biiiiiiiiiiinta! What haaaaaaappened? You went crazy in this. Just be your classy, reserved self in motion. Don’t cry. They’re gonna forget it all in a minute ’cause you’re followed by:

Kyle, Kyle, Kyle. I laughed out loud. I had to rewind to show my husband. I’m sorry. But that shimmy at the end. Ooof.

Courtney somehow skirts getting called out for complaining about nothing. And is also told that all camera’s love her on top of it. Courtney’s leaving happy as a clam.

India’s is great. Editors threw in shots of Paige to be like “HOW DOES PAIGE FEEL?” Well she can’t feel good.

TOP THREE PREDICTION: Cody, Tatiana, and Paige
OMG I KNOW BINTA I KNOW I KNOW but things are shaking up. Also, Court, your face is only gonna get you so far and I think you’re gonna complain one time too many…

NEXT WEEK: A photo shoot in a plane, more complaining from Court, and another party but now with more Jason Derulo.