To recap from last week, India won after dancing in the streets of Harlem for a clothing line. She did pretty good actually. India says this week that the judges were waiting for the moment for her to stand out. They tried to help her do that with the purple hair, which is now a sad mix of purple and grey. Not gray. Get out of here with that “grey is spelled with an a nonsense.” #FakeNews Sad.

India also reminds us there are only 8 contestants left. Shit is getting tiiiiiiiiiight.

In the bedroom, Tatiana and Coryanne talk about how they’re being overshadowed. But you know what? Tatiana is a boss. Coryanne may be the daughter of a supermodel. But Tatiana is a real BOSS of a COMPANY.

Marissa got a goodbye letter from Kyle and ALL OF A SUDDEN is sad calling Kyle her “cuddle bunny”. Right. This after being so hot and cold to poor Kyle when Kyle was in the house. So she doesn’t get my sympathy now. Do not believe. Resist.

Binta goes over her criticism from last week with the judges saying she was looking “bat shit crazy” (she was). Then Binta gets emotional talking about her upbringing – not angry, emotional. It’s very moving. Makes me heart her many times more.

Later in the Kitchen

We got Tatiana and Coryanne talking about freezer and fridge space. Real nice, innocuous discussion but OH HELLO DID YOU FOGET COURTNEY IS IN THE ROOM? Cause she’s got a complaint about the chopping board. Coryanne, real diplomatic like, decides to sit her down and point out her tone. Courtney says she has resting bitch face but there are also words that come out of her mouth. Oh. Man. Coryanne starts addressing the elephant in the room (Courtney’s attitude) and Courtney pulls script out of Kellyanne Conway’s mouth with the double speak. Courtney in her confessional says the house is getting to her, calling out the other contestants as bitches. I would care more about this argument but I don’t.

I swear she just flops back onto her bed right after these things.

But she does say we’re revisiting Philipp Plein who, if you don’t remember in episode one gosees (which were a terrible idea) said some stupid shit.

And all the contestants remember that shit.

Cody apparently thinks the high life is private jets and throwing money which combined are “everything she wants to do in my lifetime.” Girl, there is so much more to do! Sign up for the MoveOn.org newsletter to get ideas!

The ladies try on some expensive shit and then they get their hair did. Courtney, apparently, thought she was close with Coryanne but it’s only Paige girl. The only model that can tolerate you is Paige.

Coryanne admits she’s high maintenance but loves her party life and Courtney hates that Coryanne gets what she wants but she’s gotta work for it. Again, I don’t care that much about this drama.

According to this house, Philipp Plein is definitely overcompensating for something. Also, each of those dresses the ladies are wearing costs more than $10,000. Well, one piece of advice for these ladies then: don’t drink red wine. Always ends badly for me. And then you’re in for 10 grand.

The challenge is for the ladies, at this fancy party at Plein’s house, to put on a “fashion editorial come to life” – like a page from a magazine. They have to work together and work the room to show off the clothes in PAIRS. That’s two models forced to work with only each other. But the winners get free Philipp Plein clothing! Do they get to say some terrible shit back to Plein while they’re in his store after hours?

The pairs all start building stories for their particular rooms. I thought we were getting a posh, celebrity party but all it is is Jason Derulo, Michael Musto and the rest look like…paid extras…

I’m not hating on them. I would’ve answered that casting call.

So in the rooms: Tatiana and Coryanne were fine. Courtney and India are so BORING. Marissa and Cody took on a (bad) acting challenge. Binta, in a confessional, is vulnerable again talking about how she’s still insecure because of her youth in Gambia. This is getting into Binta’s psyche FOR REAL. I love it but it affects her performance and poor Paige can’t save her.

Oh, Bt dubs, Jason Derulo is apparently not only a guest at the party but is also a judge in this competition. Twist! Kind of? Also, why not Michael Musto??

Marissa and Cody win the challenge with their bad acting but also, at least they fucking tried something. So they get to go to Plein’s store and get to pick whatever they want. With champagne. I woulda just grabbed one of everything and found someone to take it after. Like all those families on Miry’s List.

Now with an orange background that is supposed to pop her distorted face. SHE DOESN’T EVEN LOOK HAPPY TO BE THERE.

They get to the hangar and surprise! Courtney has some ailment and needs Benedryl. But no one’s got any! Sorry Court.

Drew comes out to discuss what’s going to happen and oh man. Drew Elliot trying to sound cool mentioning Kim and Kanye and Beyonce and Jay-Z is amazing. What was that writer’s room like? Did Drew come in and pitch the idea? Was he like “these are the names I want to say”? Were they like “try to say these names and not sound dorky AF”? Well, he failed.

Anyway, the models are gonna model the high life in a private jet with Jason Derulo.

Binta comes out of the gate saying she is ready to be up at the top, “nothing in the middle, nothing on the ground”. THEN India makes some real vague statement about having had a chance to be on a private plane but “passed it up.” So…what is this story? Were you asked to be a paid escort? Did your flight get cancelled and you opted an airport hotel instead? Were you invited by Beyonce and Jay-Z?

India actually ends up popping in her shoot after this weird admissions.

Tatiana gets in there and looks like she BELONGS on that plane. Like “WTF you here for” to everyone else. She even flat out says Derulo is just a passenger! I buy it.

And then Coryanne returns with the model I remember. “This isn’t junior varsity modeling.” “A sexier shape. Yea. Well not really.” Your beautiful girl but modeling is lacking.

Courtney gets up and what? SHE COMPLAINS? DUH. Jason literally looking at his watch in her shoot! And then she DISSES JASON DERULO without even saying BYE. Courtney. Ugh. We’re done. You done fucked up.

Marissa has decided to call it a “PJ” (private jet although as a mom I can assure you PJ are pajamas) and didn’t mind her boobs popping out. But, while she played around like it was her jet, Tatiana is still the only one that looked like she belonged there.

Cody is just a beautiful model. Girl, everyone’s already forgotten there’s another woman who looks like you. Sorry Tash! But Cody is killin’ it.

Then we get to Binta. She is given the direction to do a bitch attitude. And was being thrown so much direction. And she’s already upset. And I’m sad. I would like to hug her. Jason Derulo should have hugged her. JASON DERULO IF YOU’RE READING THIS HUG BINTA.

Coryanne wants to break down Courtney. Oh man. We get a look into Courtney’s past too and it is awful. She was homeless and her mom was a hoarder and never said she loved Courtney and kicked her out and I feel like a garbage person for getting on her for complaining. Coryanne is right that everyone needs love. Courtney wants to be an inspiration because she didn’t have anyone to look up to when she was young. (But also, she does complain a lot. It’s a personality feature and she does do it. It’s documented. Is it mean to say if it’s documented?)

THE PANS! I can’t with the makeup commercial pans. Only Rita gets them this week. But that static photo shows just how much check blush there is. (Hint: a lot. Too much.)

I hate to admit it but India POPPED LIKE A BITCH. So much so that Rita admits she wants to fuck her. I mean…

Then the judges get into Paige for her photo. Ashley has a total Tyra moment where we revisit Ashley’s entire photo shoot with the same plane. But Law has Paige’s back. And I agree. That photo isn’t all that bad. The dress looks great on her.

Binta is just super vulnerable the whole episode. She doesn’t even wait for the photo before she says she’s dying and wants nothing less than the best. HUGS. After they show the so-so photo, Rita gets into vulnerable Binta and says that the problem is herself and she has to figure it out. And Law reciprocates with “you have to find Binta again because she’s missing.” FIND BINTA!

(So far, this is the best judging we’ve had this season!)

Tatiana and Cody both had their great photos while Coryanne was taken back down a notch natch.

And then Courtney, which now I feel like I have to always have her family in my mind. The first thing out of her mouth though is that she had allergies. Drew is not impressed with it. Not. Impressed. He’s done babying her. Drew is also having a Tyra moment!! Omigosh. If only Law had one too… 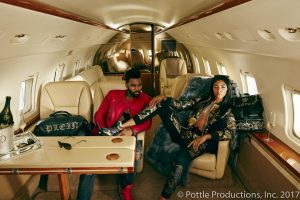 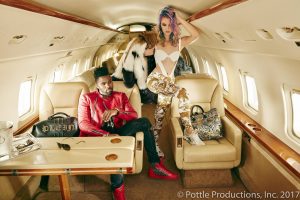 BOTTOM TWO: Binta and Courtney – now I fully admit that I was totally wrong in week one about these two. Obviously if we’re at this stage in the game. But I can admit my mistakes unlike some others who may be in the national spotlight right now.

OH NO BINTA BINTA NO BINTA IS GONE BYE BINTA

NEXT WEEK: Eliminated models are back. I hate when they bring the models back but at least it’s a dance challenge and Justine OH NO JUSTINE FAINTS!