This week’s episode starts with Courtney saying she feels so bad for Binta which, c’mon. You had a big ole fight. Tatiana though keeps it real and is like “nah. I mean sure it sucks to be kicked off but nah I want to win. Also, I’m a boss.” It’s true. She has her own beauty line. And now she has best photo.

Courtney then goes into how it is intense she felt being in the bottom two and how the judges ripped her to shreds but they’ve been giving her shit over and over and over again. It’s just that she happens to have bomb ass eyebrows and cheekbones so, you know, complainers get to stay. She even says she can’t just be a pretty face anymore now that competition is smaller. Duh.

It’s another choreography challenge. Rita says this time they’re taking it all the way up and seriously, even when she says THAT she sounds like she hates saying it. Even when she says they’re “TAKING IT WAY UP” it looks like she’s taking it waaaaaaaay down.

“Way up”, btw, means they’re doing a whole fashion music video. During Rita’s blah explanation, we revisit Marissa’s previous dance challenge where she sassed Stacey. Which Marissa follows up with “I didn’t come here to dance” and again HAS ANY OF THESE CONTESTANTS EVER SEEN THIS SHOW?? They’ve had models walk around in hamster balls, put a runway on the side of a building and, I know I’ve mentioned this already, but walk a runway holding fire. Dancing is the least of your worries.

Anyway, this is really just to get the eliminated models back. JUSTINE! Justine who wants to prove she’s more mature than she was the first time she was there which was…like 6 weeks ago? Oh you so freakin’ adorbs.

Omigod and Kyle saying she was a distraction to Marissa and doesn’t want to step on Marissa’s toes but since it’s a competition, SHE PROBABLY SHOULD. She should if SHE WANTS TO WIN. Stop being so nice Kyle. I mean don’t, but not in this case.

And they’re all, all of ’em, are gonna be under the same roof again for the week. HOLLA!

(And of Courtney calls bullshit on the whole situation.)

Cody admits to being scared of Tash being back in the house and she shouldn’t be cause she’s killing it.

So who’s teaching them this week? Drake and Rihanna’s choreographer: Tanisha Scott.

Tash is apparently real familiar and has stolen her moves. But India, having won the last dance episode, is also real confident.

Also Tanisha is super cool and instead of her showing them the routine, she’s got her assistant doing it as she watches like a Gypsy Rose Lee. I do wonder if there was a smack around after this display.

Also, ya for that BINTA top! Love. It. (I tried to get a still for you readers but she was dancing in it so it was tough to get a clear one. But know it was amazing.)

Marissa decides since she’s not getting it, she’s gonna stay away from Kyle and, well, just stay away from everyone and watch. Good. Strategy. But don’t worry. There’s more. She just flips out crying and leaves. BETTER STRATEGY. Marissa hates dancing.

(Also Courtney throws her some shade and calls her unprofessional. Pot to the kettle much?)

Rita assures them she doesn’t want them to be Janet Jacksons but also if Marissa sucks it up, SHE IS OUTTTTT.

And here’s that kicker of Justine falling. I TOLD YOU IT HAPPENED IN THREES!!!

Anyway, Justine passes out, they call an ambulance. But Giah prayed and Justine woke up! And Binta don’t give AF. She’s got her eye on the prize and just keeps practicing through the drama. Justine also says the “opportunity is literally slipping through her fingers” which is not what literally means. Giah keeps God in the conversation though and sends Justine off with a “God loves you baby.”

The models audition for lead dancer. Squad A, the girls in the house, first. There’s not a whole lot to report back on. Paige and Tatiana got it, Marissa didn’t, Courtney’s got a metal spine.

Squad B, same thang CAUSE JUSTINE’S GONE and what else is there to say about it.

Well now it’s back to lots of women under one roof. And Giah does the classic “nobody’s here to be friends”.

Tash and Cody have a heart -to-heart where it sounds like Tash wasn’t even sure about modeling but winning the challenge got her back on track. And Cody thinks Tash is her biggest challenge WHICH ISN’T TRUE. But then there is some serious shade thrown by Cody who is always so quiet! She’s gonna get her crystals and pray her out of here. So much prayer this episode. That conservative base must’ve be praying for it. #Sorrynotsorry

ANYWAY, all is well because JUSTINE is back. She just had some dehydration. And yay for Paige helping her out while also saying she’s big competition “even though she fainted.” (she’s not – love you boo).

Kyle and Marissa AGAIN ignore practicing for the challenge even though Marissa was fucking up left and right. Should’ve listened to Giah, no one’s there to make friends so you shouldn’t be there to make girlfriends! Should be practicing the dance moves you keep fucking up and not practicing kissing! These two will have plenty of time to each other when they both get kicked off. And that’s my truth bomb.

The ladies get all up in hair and makeup. Drew shows up to say that it’s a video like T. Swift’s Bad Blood, squads against squads battling it out. With designs by a guy with green hair named Christian (it’s Christian Cowan who designed for Lady Gaga).

Then Tanisha shows up and lets out a weird, orgasmic scream cause she’s so impressed with Christian’s designs. She also helps prep the girls. Hey, remember when someone tried to help Marissa last time? Well, I guess she learned her lesson cause she didn’t say anything.

After the hair, makeup and dance prep, the ladies go to an underground parking garage and stand behind a closed black van with some ominous music playing to be like “who is in this van?” You know who it is? It’s fucking Rita. C’MON. We all KNOW she was upstairs while they were getting ready. Why make this seem like a reveal? This is dumb ANTM.

AND she has a fucking bag that literally has $100,000 written in GLITTER GOLD on it and that’s what the ladies are fighting for in the video. Ugh. I think this show is exhausting me now. Only took 23 cycles and NO TYRA.

After Rita though is, finally, an actual reveal. French Montana. He’s gonna be on hand for the video. Poor guy. This “music video” nonsense is not worth it.

I have to say, this was the most boring thing to watch. Even when they called out Marissa. Watching Squad A was boring AF. It’s more fun to watch my kid take something out of a box and put it back in ten thousand times then watching this garbage challenge.

Squad B was only slightly more exciting but that’s only ’cause WTF was on Giah’s head and Kyle’s weird ass dancing. But I think the crux of just how fucking boring this was, were the shitty sound bites from Cherish. She had to have said some crazier shit.

Then the two squads danced against one another and it went back to being boring AF again. Garbage.

WTF is Rita wearing?? At least there are no crazy makeup pans. 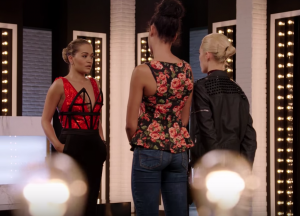 BUT WE WERE SPARED A RITA ALERT Y’ALL. That’s something!

Then we get to the video and oh hai SURPRISE – the video is just as fucking boring as watching them complete the challenge. That was like a Garage Band beat that went nowhere with the lamest choreography which I’m sure Tanisha had to make simplistic for the models. And POOR French having to be involved with this nonsense.

I mean, I can’t even watch this judging! It’s as fucking boring as the video. Even the cut to Kyle when they were talking to Marissa about what she has to “leave at home” is BORING. Ashley critiques Cody saying she could’ve faded back at the end with her hat down. Cody responds with an awed whisper. AND ASHLEY SAYS “That’s why I’m a supermodel.” BECAUSE SHE KNOWS A HAT TRICK?! I mean, what is this episode?

Even Squad B is a mess. The Kyle standoff, the Cherish standoff, I mean, I don’t give AF. Justine look adorbs as usual tho.

BOTTOM TWO Squad A: Courtney and Marissa. I mean, I think we all knew who was getting kicked off before Rita called it. Marissa pretends to care but she doesn’t care. She’s probs looking forward to kissy face with Kyle.

TOP TWO Squad B: Giah and Tash. I honestly didn’t know who it would be but Tash makes more sense for the show, drama wise. Bring the twin back to compete against the person who looks exactly like her!

TOP THREE PREDICTION: Cody, Tatiana, and Paige
NEXT WEEK: Amber Rose! Heart! And Stacey’s back! God, I hope this episode redeems the show for me.