Look, I know The Daily Mail is absolutely reprehensible bile. You don’t get to be the UK’s primer mid-market tabloid by doing in-depth think pieces about The Global History of France or the human network behind the Snowdon leak. You do it on the back of disgust for the “underclasses” and women, gossip that only juuuuuust qualifies as “celebrity,” and with an almost pathological rejection of correct punctuation or attribution. You do it, in sum, by mimicking the basest impulses of a modern participant in Western society. 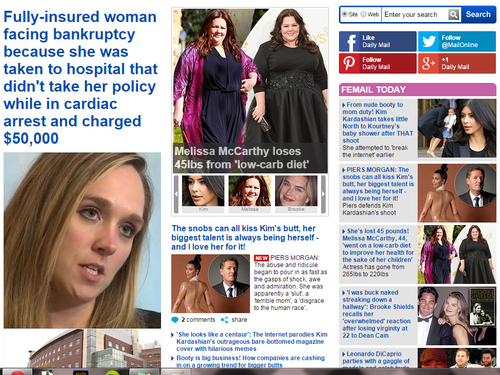 This is their version of “below the fold” “news.” It’s also an efficient way to gauge how fucked we are. Current reading: Very Fucked.

Exaggerating The Worst So You Don’t Have To

After surveying many of my friends and co-workers about their Daily Mail habits, I’ve come to two conclusions about it’s draw for modern women. First, and arguably most insidiously, on any given day a chunk of the stories you’d read on sites like Jezebel, The Huffington Post, and Buzzfeed – let’s call them “distraction journalism” – will be sourced from this steaming digital pile of mental refuse. Bustle, the women’s interest site started by a dude who contractually had no other viable audience, was such a reliable funnel for sourcing from The Daily Mail that they went so far as to purchase The Daily Mail’s “millennial” site.

The second and most universally cited pull was a desire to, in the words of one friend working in feminist digital media, “know what I’m up against.” This goes beyond their employ of noted shite spicket Piers Morgan; The Daily Mail Online has a global readership of 100 million unique visitors per month. The average age of the Daily Mail’s readership is 58 and has built it’s brand around the interests of the wealthy speaking to the lower classes.

If you want to understand the kinds of things older folks more prone to support isolationist policies, a raft of objectionable and poorly sourced stories that sound like lies when you soft pitch them, and politicians that peddle worldviews that shouldn’t be viable in 2017 – e.g. Brexit, Donald Trump – then the Daily Mail is a window into that world.

So, Are You Saying I Should Read The Daily Mail?

No. Seriously, don’t read The Daily Mail. It’s terrible. Save yourself.