Something in the news had been bothering me for weeks, something more than just the actual news itself. Pretty much to the publication, discussion of Russian interference in the 2016 election is described as “meddling.” 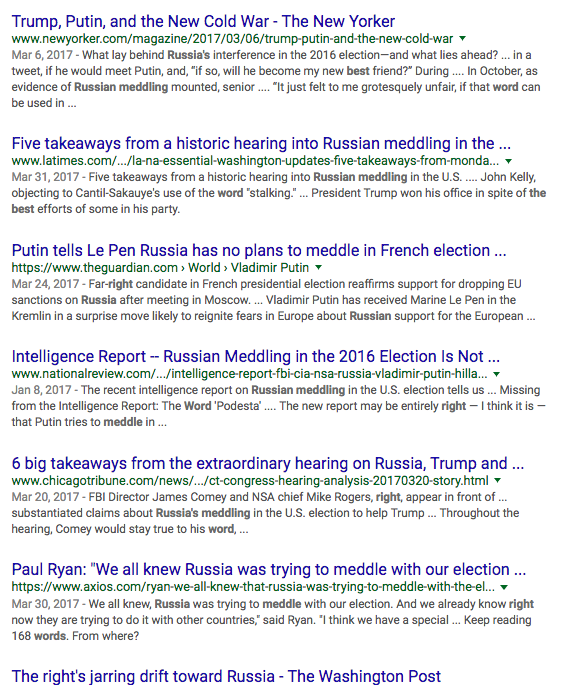 Meddling. Sit with that word for a beat. It’s just so… not the forceful subversion of a democratic process. Meddling is what your Aunt Linda does with your parents’ sex life. It’s your Dad telling you how to grill on the Kenmore you yourself own. It’s an intervention deserving of an eye roll, not a special prosecutor. Meddling is non-threatening; an annoyance at worst.

In other words, meddling is NOT the current state of affairs. What Russia is alleged to have done (and is possibly still doing) is malicious. It’s aggressive. It’s decidedly threatening. So why does everyone still use such a low-intensity word to describe a major assault on national sovereignty?

1. No One Is 100% Sure What Russia May Have Actually Done

In late 2016, the word on the street was Russian “hacking.” The operational thinking at the time was that the leak of DNC emails (that showed how ugly internal party politics can be) was a state-sponsored attack by hackers working at the behest of the Russian security agency, the FSB, and their friends in the Russian military apparatus. So Russia gets emails that show nothing illegal but do show that people talk shit about their friends and bosses and then… well, it depends. If you’re looking for something to dislike, you found it. It appears that in 2016, there were enough people on the fence for this action to tip enough people in the right places into the Trump column. Was a “hack” the single thing that changed an election’s outcome? Hard to say.

Not to get too liberal arts, but we use words to convey meaning and technically speaking, the term “meddle” isn’t wrong. The good people (and weapons-grade brandishers of the “sick burn”) at Merriam-Webster Dictionary define “to meddle” as “to interest oneself in what is not one’s concern :  interfere without right or propriety.” Does “meddle” correctly convey the nature of what went on? Yes. Does it fully communicate the charge of the situation? Nope, not even close.

Ask a random group of people what can “throw off” an election and you’ll probably get a lot of the same answers: People stuffing handfuls of fraudulent ballots into ballot boxes, people voting multiple times, or people voting for people who aren’t there. What you WON’T hear a lot of is “violation of norms of fair play” or “manipulation by the authoritarian international” because these things aren’t visually active. Over time, they shift the grounds upon which democracies are engage. It’s deeply cynical and long term, so it’s hard to point to as a “thing” someone is “doing” so using less charged language may be a way to ease people into more complex lines of argument.

4. Language Is Kind Of Broken

Even before Election Day, we kind of knew we were seeing a fundamental shift in the way we talk about things in public life. To that end, and to a community of journalists constantly fending off attacks of “fake news,” a term like “meddling” may be the most correct even if it isn’t the most accurate. Does “interference” convey more of the imperious attitude that may have led to Russia (allegedly) mucking about in our election process? Sure. Will it lead to a charge that a biased journalist has it out for President Trump? Almost anything can, so, yes.

At the end of the day, we’re going to hear a lot more about “meddling.” Even if I can’t stand the saccharine sound of the term, I remain proud to live in a country where I can speak freely in my own life of Russia’s “absolute fuckery” in 2016.