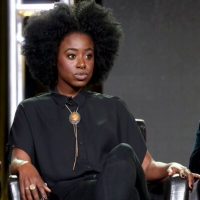 Kirby Howell-Baptiste is an actor and writer that proudly hails from North London. She began acting at The Anna Scher Theatre, at the age of 12, when her Mother thought it best for her to interact with things other than Barbie dolls. Since moving to Los Angeles, Kirby has appeared in House of Lies (Showtime), Comedy Bang! Bang! (IFC), and Six Guys One Car (Comedy Central), and is a recurring character on the Judd Apatow/Lesley Arfin/Paul Rust show, LOVE (Netflix). You can see Kirby performing on Harold Night with Nomi Malone at UCB Franklin. If that’s just not enough, Kirby also performs at various indie shows with teams including Essence, an all black, all female group, and Potato Potato. For food based comedy, check Kirby out on the 2 (wo)man team 2 Hot Dogs with fellow UCBer Natalie Palamides.