IKEA is the home of the thrifty interior designer and I am not immune to the cost effective allure. So, after a recent trip through the expansive marketplace that feels like I could just curl up and live inside the store, I started to wonder more about this mega-design-behemoth.

And guess what I found? They wanted to build an entire IKEA town! No, not in one of their stores, though that doesn’t feel out of the question #amiright?

I was so freakin’ intrigued but I couldn’t find anything about the proposed town post 2013. I Google mapped it but the satellite photos are from 2014 and they don’t look good. Even their website wouldn’t load. I waited patiently on three different browsers. No. Luck.

Bring all this up at brunch and if you find out what happened, let us know! I mean, can you imagine that episode of House Hunters?? 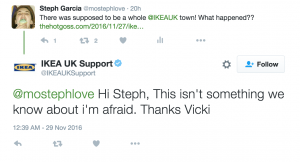