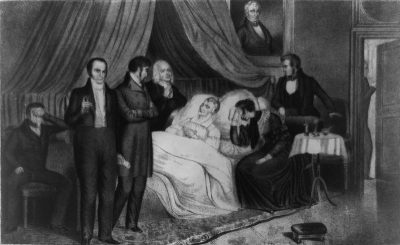 Today sucks. No going around it. It’s raining here. I hydroplaned in my car. Cried while listening to Beyoncé sing “who runs the world, girls”. Then stepped into a river of water getting out of my car, soaking my whole right foot. And oh yeah, Trump has started his presidential term. So basically today can get straight up and go fuck itself.

But there’s one thing that has been making me happy – remembering that not every president (#notallpresidents) has served all four years of his term. So let’s talk about those shortest presidencies. And Sunday (after you’ve marched your heart out on Saturday), when you’re sitting with your best mates eating brunch, you can talk about these three dudes. You know, as a small detour on your way to planning the revolution.

Taylor, whose term lasted a mere 491 days (just a little less than a year and a half). Taylor aka “The Last President to Own Slaves”, died in office after eating an exorbitant amount of raw fruit and iced milk at several holiday parties. Because of the “open sewage” system in Washington at the time, and the poor treatments from doctors, Cholera was most likely the culprit.

Garfield’s term lasted from March 4 – September 19. So like six months. Garfield, Aka, “The Only President who Came from the House” (cough, don’t look good for you Ryan) was assassinated over essentially a guy not getting a job. But the crazy thing is, his assassination was only 20 years after Lincoln’s. The security at the time thought Lincoln’s assassination was a fluke. So they were like “we don’t really need to watch this president dude ALL the time, do we? Nah. Let’s eat some gross 1800’s food.”  Also, supposedly when he was shot, Garfield said “My God, what is this?”

Harrison lasted only 30 days. After having a cold that turned into pneumonia, and being treated with leeches, opium, castor oil, and whatever else the doctor pulled out of a trash can next to an opium den, Harrison passed. Harrison, aka “The Last President to be born a British Subject”, is a great example of a bad healthcare system.  So think about that while you’re watching the GOP repeal the ACA. And get back to planning that revolution already.