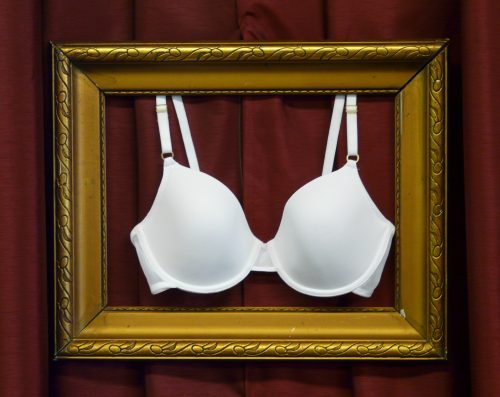 Talking to a woman who’s just recently been correctly sized for a bra is like talking to a recent Diva Cup convert, or a recent yoga class attendee. In that they have that super annoying way of talking about it constantly.

“You’ve gotta get sized. You’ll be surprised at what size you ACTUALLY are. I’m a D!”

I’ve said two out of three of these statements to my female friends. Recently. Because, just the other night I got re-sized. I went to a real bra-telier (yeah, you’re welcome) after I noticed my bras were all looking like sad pandas. And, also, after going to a baby shower a few weeks ago, where we all started talking about bra-sizes,  (as women do), when someone I love dearly, asked me straight-up, “What size bra do you wear?”. I said, “Uhhh 36 C”. To which she responded “Wrong! You are NOT a size C. You’ve GOT to go get sized. Your boobs are a lot bigger than that.”

So I decided she was right. I’ve always just sized myself, because, as a dance teacher, I used to size costumes for kids, so I kind of know my way around a measuring tape. But lately, I’ve realized, I’m working with some tig ole bitties up in here – for my short frame, anyway. When I wear a t-shirt it never really looks great because of the weird slope that goes straight from my boobs out, creating a voluminous swath of t-shirt fabric around my stomach. It looks like a mesa.  All slope until you get over the hump, then it just plateaus.

As I went into the store that doesn’t care anything below a C cup, I was a little nervous. I knew this woman was about to see me topless. And that’s something I reserve for people who’ve bought me dinner. And then I thought she’d get the tape out.

But nope! Girl just looked at me in my sad panda bra and was like, yeah, you’re a 32 D. SHE JUST LOOKED AT ME. I don’t know what kind of voodoo shit that was. And when I asked her, she just lit a candle, stirred a pot of some kind of tincture, and poof she was gone.  But the whole experience left with me some important pieces of info that I thought I’d share with you.

Four Things I Learned at My Boob Sizing

Sizing is for chumps. It’s a system created by the patriarchy to keep us focused on stupidity and only distracts us from rising to the top. This is actually basically what my best friend told me after I told her my new bra size. And I realized, she is fucking right. While I was writing all this shit about bras, Donald Trump probably took all of our human rights away… again.  So what if I look good. Fucking patriarchy.