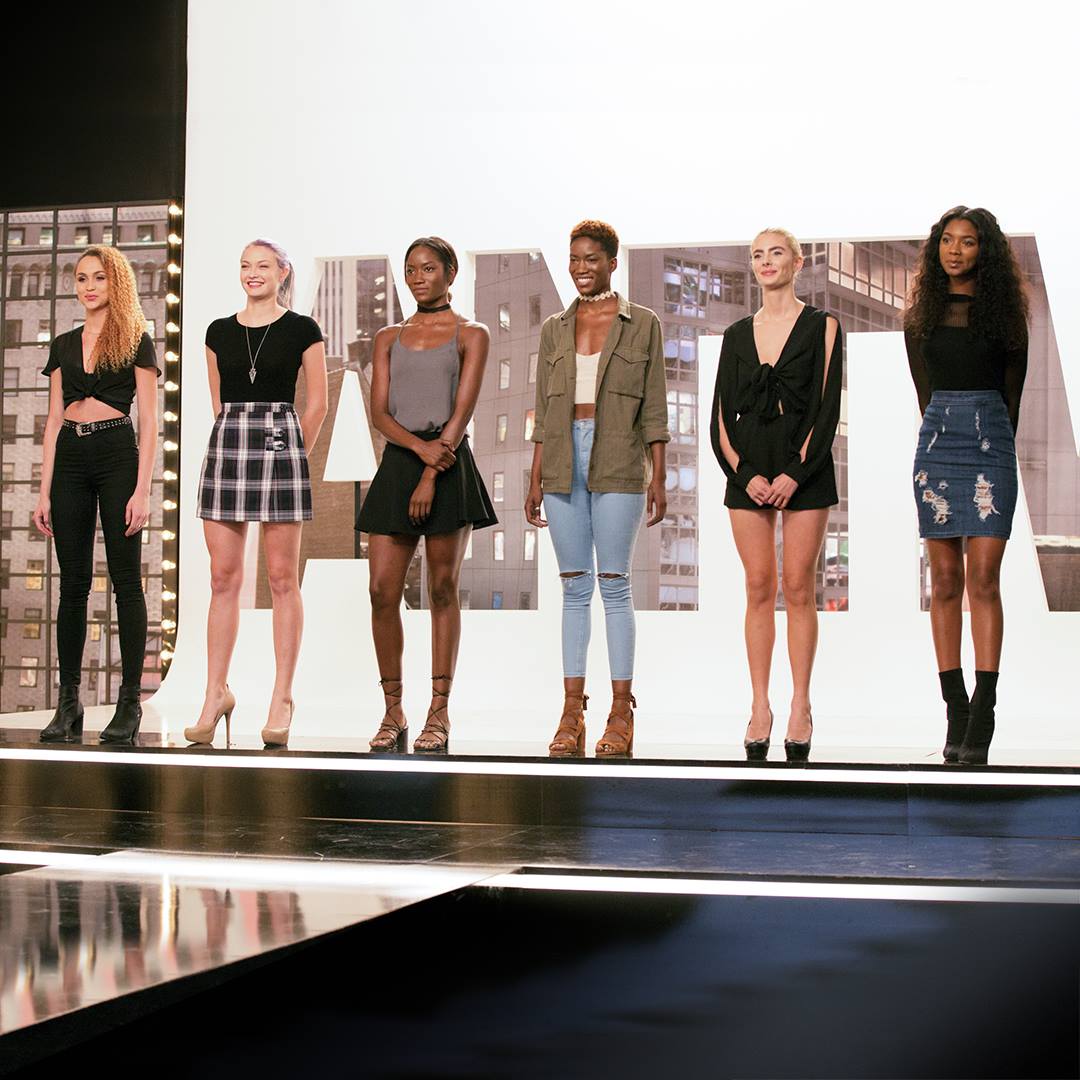 You know what? This is still a house full of hopefuls so let’s focus on what we can here. Stay. Focused.

We start out this week revisiting India and Tash’s tie for winning photos. Coryanne points out how much India channeled Katy Perry and IT’S TRUE she did. But in the same breath, Coryanne negs on India’s star quality which equals zero. Kewl.

Coryanne’s not done though! She then compliments Tash’s in motion photo of Tina Turner. Which Tash responds with “You’re the only one that gives me compliments.” TASH! You JUST got back in this thing. Whatchu talking about? What time did anyone have to give you compliments? Slow down.

But then Tash, in her confessional, makes me shut my mouth because the tie makes her hopeful that her and her sister can win together. Normally, I would say that seems up ANTM’s alley but that’s in Tyra’s day. It’s the upside down now and Barb was cut in the second episode. (Ok, I know this analogy doesn’t work, but did you want me to try another fucking political thing? Btw, probs gonna throw in another political thing or two in this recap. #sorrynotsorry) I just mean ANTM won’t let them win together.

She describes their upbringing with adorable kid photos. Apparently, Cody considers herself the outcast while Tash got all the familial validation. So Cody is ready to fight a bitch for this win.

Then we leave the twins to go to Courtney and India. Courtney, whose only friend in the house in my viewing audience mind, was Paige now says India is her friend in the house. Whatevs. I’m so over Courtney at this point. I know, I know. I remember her discussing her terrible family upbringing but she’s still in this house, right now, being Court. So. There’s that.

And it’s Rita. Bleh. ALTHOUGH A++ on that outfit Rita.

The ladies give Rita a tour of the house. Tatiana is super stoked to get to know Rita. Spoiler alert Tati: Rita’s tired AF all the time. AND GUESS WHAT? Rita, on the fucking tour, literally says “I’m so exhausted.”

WHICH MEANS MY THEORY HAS BEEN VALIDATED! Mark it down Hot Goss readers. That shit is RECORDED. Although, as we all know, this may eventually be deemed an #alternativefact.

Anyway, Rita says she wanted to come over so they could get to know each other one-on-one since there’s so little time left. FYI, this means she was probably too fucking tired when there were a lot more ladies around to get to talk to that many. But only six contestants are more reasonable for her tired ass. Maybe she should get that checked out by a doctor.

Rita goes into her life story about pursuing modeling with an unsupportive family. And Tatiana jumps all in with phrases like “It’s a sacrifice.” “Higher the risk. The higher the reward.” “Everything happens for a reason.” Girl listens to a bunch of tapes I bet. Or podcasts on the phone. Or…what are the kids doing these days? I still got a CD player in my Highlander with a kid’s CD playing on loop and lemme tell you, kid’s songs nowadays are uplifting as all hell. Probs not what Tatiana is listening to though.

Lastly, Rita talks about social media and how they’re all gonna get comments on every social media site everywhere. And she adds that she’s scared too. Hi RITA! Are you reading all my shade? You’re probably a lovely person so I’ll blame your editors for you looking so bored. But this is what I’m seeing! Just wanna be honest with you.

After Rita’s social media blurb, Cody decides it’s Q&A time. But her Q isn’t really a Q so much as a C: Complaint (not a C U Next Tuesday…ugh…was my mind the only one that went there? I like Cody). Cody lets it riiiiiiip. She’s all “I’m strong and independent and then Tash comes in and it’s all MARSHA MARSHA MARSHA.” None of the other ladies like this at all, at least according to the editors. Including Tash who is like “Mmmm me modeling got us attention so I deserve a thank you too.” And just like that, the twins have made this Rita session a therapy session. Girls, Rita will fall asleep on you. Find an actual, licensed, therapist.

Rita’s like I got to get the fuck out of here and leaves them with their challenge for the next day which is to spend a day in her shoes. Get ready to sleep ladies! Nah, it’s paparazzi. It was in last week’s previews.

The four non-twins powow about how awkward the conversation was. And for once I like what Courtney’s putting out! She says it was an advantage to the four non-twins because it made the twins look bad. And not “boss-like.” True. True.

Oh. Btw, did you think the twins were going to stop fighting after the dish sesh with Rita? Then you don’t have siblings. They bring that shit to the bathroom and fight THROUGH THE SHOWER. It’s perfect.

The ladies jump into their party van and when they pull up to where they’re supposed to be going, there’s paparazzi. They were not warned about the paparazzi apparently. But Tatiana is like “mmm I know this is a challenge and I’m gonna STRUT.”

They get up to the Haven rooftop of the Sanctuary (note to self: place on to-do list for next trip back east) and sit down with Rita whose hair was caught in some wind tunnel. She tells them the challenge is to walk back out and deal with paparazzi. But also, again, if anyone had watched this show, this was done in a previous cycle. Anyway, Rita describes the paprazzi as accidental modeling instead of crazy invasions into personal space for our society’s weird obsession with celebrity that maybe we should curb. And in case you think I’m all high and mighty about it, I admit to giving in to this shit and my mom has had a People magazine subscription since their very first issue in 1974 so I grew up on it. Does not mean we should glorify it.

Whatever. The girls do a psuedo runway walk for the fake paparazzi and get back on the party bus.

Drew meets the girls and Rita to tell them they’re going to shoot a Paper Magazine cover and “only a superstar gets the cover.” And that is…TYRA BANKS! Oh, not present? Shame.

I also love that Drew’s like it’ll be “published” and viewed by the world on papermag.com NOT IN PRINT YOU ASSHOLES. Did you really think you’d get an actual hardcover cover? Please.

Rita does some help with styling and, while she is actually adorable in her helping, there’s not much to report back on. Other than they’re going to focus on Courtney’s eyebrows natch.

Oh hey. Did you think the fake paparazzi were taking fake photos? Cause no. So Rita and Drew go over the paparazzi photos. Coryanne is supposedly the one who gave the most face but India, to me, is the only one who didn’t give AF. And for that, thumbs up. But, for some dumb reason I don’t understand, they gave the challenge to Courtney. Probs the eyebrows. Anyway, Courtney picks India to jet off to Universal in Orlando for a day off. But I wonder how many rides Courtney can ride with that rod in her back…

Tash starts the photoshoot in this white feather scarf thing and says she has the idea of herself as an angel coming down to “save the children.” What children? What is this? What does it mean? The photographer totes calls her out on being too theatrical and the kids get killed real quick. But Tash won’t let them die! No! Her hands will stay in the frame damnit!

At least until after the commercial break. Then she stops that shit.

Coryanne gets called out by Drew for looking like an old woman. Tatiana has a big ass fucking hat on for her photoshoot. Almost as big and ridiculous as the one they threw on Giah’s head in the boring ass dance episode but that hat was nonsense. India delivered a great shoot but Drew is worried about whether she has a personality. Valid concern.

Courtney gets up and gives her best resting bitch face the whole time. So, standard Court.

But note to self for when I get asked to do my paper mag cover: NO HANDS! KEEP THEM OUT OF FRAME!

India gets all up in the confessional about how excited she is for Universal. And then says she’s glad Courtney feels like she can confide in her. But India doesn’t like Courtney! NO ONE LIKES COURTNEY! India just doesn’t want to be mean ‘cause she gets to go to an amusement park.

The four non-Universal go-ers powow about how weird that trip is gonna be for India. And how India is going to get tired of being fake. But Tatiana’s got the silver lining of Courtney being gone is really a win for everyone.

India and Courtney make it down to Florida. And starting off the most awkward montage ever, India says they have to incorporate modeling into a theme park. They don’t. But THEY TRY TO TEACH CARTOON CHARACTER MINIONS about runway walk. You know there are people inside those costumes who are just counting down to their fucking break right? And they have to deal with this nonsense. And then they wanted to do a dance routine with the Transformers. Ugh. I guess they’re young and excited. Or something.

Oh wait y’all! That montage wasn’t all of it. Just some weird intro. The ladies then visit Harry Potter World. And Courtney, I mean. Well. This might be the best Courtney episode to actually feel ok with Courtney. But they shouldn’t feel the need to model around Universal.

One good thing came from this trip: we now know that Courtney thinks Tatiana is out.

Back at the House Again

The four non-Universal go-ers dish on how Courtney’s personality sucks and how India will be able to handle it alone. Which Cody takes as an opening to whip out that gaping twin wound. Apparently Cody thinks people think she’s mean so when someone says she’s nice, she calls out Tash for being mean. Which some would say…is mean. At least Tash recognizes they need a third party to actually get somewhere in their relationship as sisters.

Rita looks like she’s going to a funeral. But EVERYONE GETS A MAKEUP PAN! Apparently, it was too much makeup pan though because they’re all shaky. Ugh. Enough with the makeup pans. ENOUGH. Also, what’s up with Ashley’s sparkly eyelids?

Courtney gave the same face she gives every photo shoot and it looks perf natch. Coryanne gets called out by Drew for looking “Tim Burton-y” but thank the Lord for Ashley Graham who points out it’s the hair and makeup’s fault! It looks like she has feathers in her hair. I mean.

Cody steps up and gets so much props from all the judges. AS SHE SHOULD. Girl is timeless. And she’s followed by Tash because that’s what drama is. Tash, unlike Cody, fails. Her photo was boring, so boring.

India gets up and has a strong picture but lacks a strong personality. Which is true. But her model game has stepped up.

Tatiana gets up and, before even the photo, is all “people think I’m coasting and I never think that.” And then she fucking KILLS in that photo. It’s wonderous. High five.

BOTTOM TWO: Courtney and Tash – And away goes Tash.