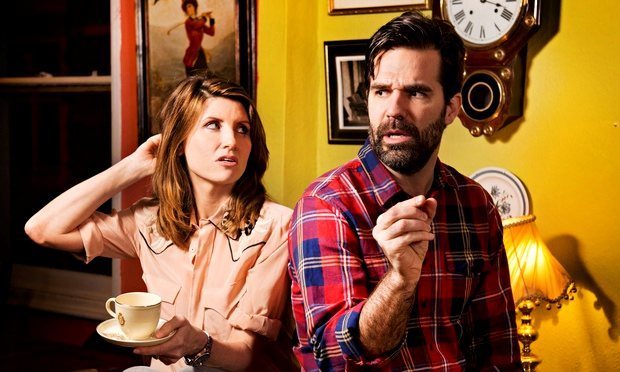 I’ve been a Sharon Horgan fan ever since I discovered Pulling years ago. (Seriously, I wish I could tell you where to watch this but I honestly have no clue. I tried to find it for you and I couldn’t. But you should still look for it. But don’t click on any suspicious links.)

So when I heard she was teaming up with Twitter heartthrob Rob Delaney for Catastrophe, I was real excited. I watched the first two seasons of the show as soon as they dropped. They were spectacularly funny, spectacularly raw, and incredibly entertaining. When the third season debuted, well, I was a little distracted with everything else going on.

So, when all this “he said, she said, I can say what I want, he didn’t know what he was saying, what he said wasn’t that bad” happened, I said fuck it and decided to watch Catastrophe instead.

It was the right choice. I recommend it.

Season 3 of the show starts us off right where Season 2 ended, which is a departure from the previous jump they did between Season 1 and Season 2.

Rob has the receipt for the morning after pill that Sharon bought. Only she can’t remember if she even knows where the intel came since she wasn’t briefed on the source. So the real problem is that the receipt even got out there in the first place.

In the previous season, Rob left his job in a fury because he was being investigated for his ties to a foreign agent in his company. The timing was very interesting as it came right after a high ranking woman in office gave testimony against him.  So now Rob’s out of a job.

Only Sharon can’t continue to be the bread winner with her teaching position so they start discussing what to do about the house and Rob has to go on a job hunt. The stress of it all propels Rob back into some bad habits including drinking and the undercutting his team’s defense of his actions.

Also Sean Spicer ends up in the bushes.

Anyway, I don’t want to spoil too much of the season. Just know you’ll get far more entertainment from watching this show than you will watching the news. And it’s WAY easier to follow.

All three seasons of Catastrophe stream on Amazon.com.