We’re glad that Colby Cooper, Chief of Staff to the mayor of the city of Mobile, Alabama, is now aware that there is a “spectrum of concerns regarding trees.”

We’d also like to encourage Mr. Cooper, a public employee, to discover the range of outrage that goes along with cutting down a 50-foot, old growth cedar tree from a public park so that President-elect Trump could have a fully decorated tree behind him as he wished the crowd at his “thank you” tour stop a Merry Christmas.

Nothing sticks it to religious pluralism like unilaterally cutting down a public good to serve as a prop in a photo op, right, Colby?

And, hey, we know that Colby simply “became overzealous” trying to “make sure every detail was covered and the expectations of the President-Elect’s team were exceeded.” We’ve all been there. When the boss (who, in Mayor Sandy Stimpson’s defense, seems to hate trees unless they’re making him a profit) tells you to use a public park as a tree farm, you do it. Responsibility to the community be damned! President-elect Trump does NOT give speeches in front of unsightly scoreboards! Sad! 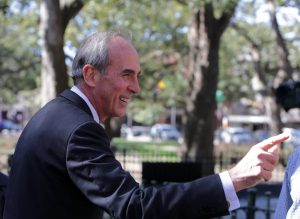 So, really, this is a twofer. To Mayor Stimpson AND Chief of Staff Colby: Naw, Dude(s).