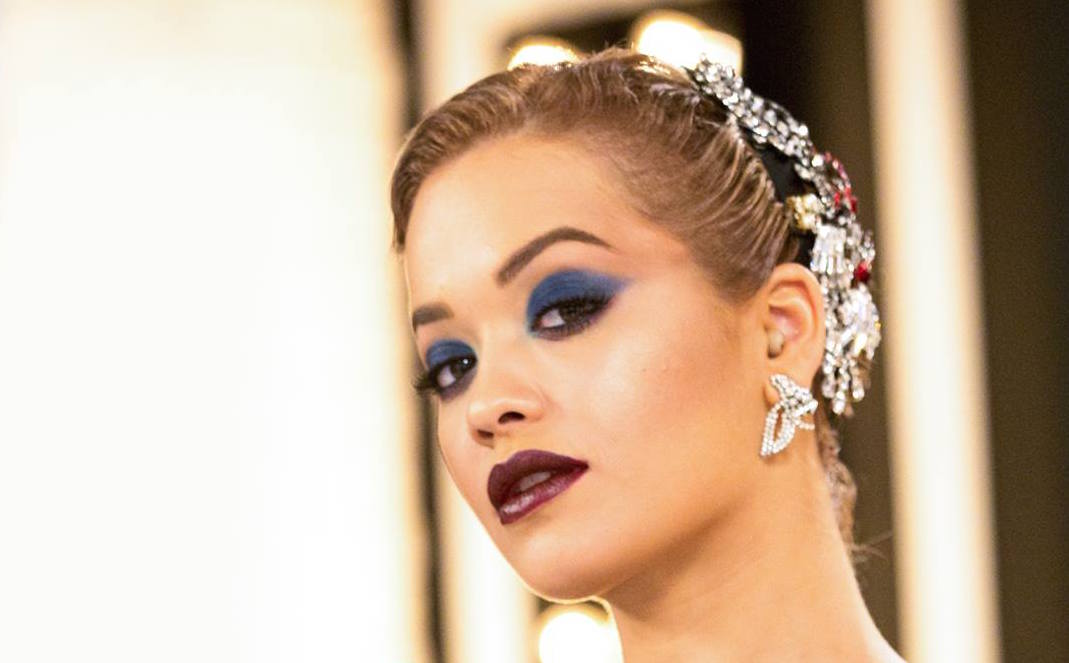 Oh hell. There are only five girls left? Guess it is “on”.

So last week Cody WON after Tash got ELIMINATED – Twins separated at panel! But apparently Cody has been modeling a lot longer and finally owned that she’s a “damn good model.” Tatiana even throws her some shade which makes me think she’s nervous. Mmm-hmm CODY!

Coryanne is somehow still in this and takes this episode to show everyone her Italian dad. Her super supportive Italian dad. Her Italian dad she lived with in Bali til she was 14 because she was distant with her mom. Ok, Coryanne. You had a tough upbringing without your mom. And you look great.

Don’t worry. Coryanne is interrupted by a fucking:

Rita’s apparently going to prom according to whatever is going on with her hair piece and earrings. (or maybe she’s going to a wedding. I dunno.)

Rita’s like “you have to play the part” or some nonsense. And everyone’s like “acting!” and Courtney’s like “make up a play” ‘cause COURTNEY IS CRAY.

P.S. Courtney’s also like “if this is the acting challenge, psh, I got this.” and yes, she said “psh”. Followed by saying she wants to be creative director which is not acting. MAKE UP YOUR MIND COURTNEY.

The models meet Rita in a theater so that Rita can tell them they’re going to explore an aspect of her own career she’s excited about: acting! She got the acting bug partly from the Fifty Shades series. That may not be an “acting” bug. OOOOH! Zing! Also I’ve never seen these films so that was a cheap joke and apologies Rita. Anywho…

Rita wants the models to get in touch with their emotions and brought in legendary acting coach Susan Batson jic they’re cold ass bitches. Batson’s like “we’re gonna work on emotional memory of loss.” Well, there’s gonna be lots of crying. Probs from me. Because loss is hard and I’m also an actress (ahemTinaFeyJenjiKohanLizMeriwetherahem) so I’m real in touch with my emotions (ahemShondaRhimesJillSolowaySofiaCoppolaahem).

India admits she’s not a naturally emotional person so being emotional is important to the challenge. And probs in life. But I’m not her therapist. I’m just a recapper on a random ass blog.

Oh and look who will be acting with them! Adrienne Moore! (ahemJenjiKohanForTheSecondTimeahem). Coryanne says it’s an honor to be working with her but I feel like Coryanne’s always like “it’s an honor” so she’s probably faking. But Cody is legit nervous.

Batson passes out their scripts they have thirty minutes to memorize and LITERALLY says to them “there’s a moment where it says Jackie, your character cries. And you have to cry.” Like they can’t read. I was so excited to watch this go down. I KNOW. It’s terrible schadenfreude (Avenue Q anyone?) but it’s ANTM! I get a pass.

AND THEN COURTNEY THROWS THE MOST AMAZING SHADE WITHOUT REALIZING IT! In her confessional, she talks about the pressure by saying “There’s this amazing actress (Adrienne). And then there’s Rita.” AND THEN THERE’S RITA. Ugh. Throw a Ritalert right here editors.

Anyway, the Ritalert thing didn’t happen. The models split up to look over their shit on their own. We got a description of the script as being one where the models’ character wants to be a star and her cousin is like “you gotta look within yourself.” But also, loss, somewhere.

Ok, so part of this challenge is to memorize lines in thirty minutes. Now, that’s not real easy, especially when you’re nervous. Tatiana is up first and puts down her script and of course fucks up her lines! She’s also stiff as all hell but Batson picks that one moment where she slips a line to point out. But don’t worry cause India goes the complete opposite direction and overacts the shit out of the script. And then Cody gets up and can’t cry and Courtney cries throughout the whole scene. Which leaves Coryanne…

The models head back to their house in the van and of course they all gang up on Courtney. Because, in case you’ve forgotten, no one likes Courtney. India tries to come to her defense, sort of, but Tatianna and Coryanne call her out like Courtney is trying to pick a fight on purpose.

I don’t know what to believe anymore. #alternativefacts

And holy shit! Rita filmed both these Ritalerts in The. Same. Day. Cause she’s still got her prom/wedding hairpiece and earrings on. I didn’t listen to what she said though but India said “ugly pretty” and I’m all in.

Drew’s there to tell them they’re going to have to emote without words because “modeling is like silent acting.” It’s also like dancing and probs some other stuff mentioned this season. But whatevs. Let’s get to the photoshoot! It’s a beauty video where the models gonna get cray and they only get one take. Also, it’s gonna be played backwards. Also they’re gonna have makeup on their hands to rub all over their faces.

So…this beauty video is a hot mess for everyone but Courtney BUT it does make me wonder if hot mess is what they’re going for. I cannot even speculate even more.

The makeup pans this week are making me feel sick. They are so shaky and awkward. I do not understand their purpose. Sigh.

India is up first and that crazy shit she pulled on set actually looks pretty good. Which makes me think hot mess WAS what they were going for.

Cody steps up and Law rips on her shoes. Which were nuts. Her video was also nuts but in a terrible way. So hopefully they judge her on the whole portfolio cause this is a mess. But not a “hot mess”. But she’s an amazing model.

Coryanne was super scary but not in an ugly pretty way. But her break down was genuine and I want to hug her. And then she talks about her mom and gets emotional AND RITA IS SERIOUSLY LIKE “YOU’RE SO EMOTIONAL WHAT IS IT ABOUT”! LIKE HAVE YOU BEEN LISTENING? Rita was probs asleep. But it becomes an opportunity for Rita to step down from the judge throne and be “emotional” too.

Tatiana’s video I actually thought was pretty good. But she got taken down by the judges which she responded defensively too. Which is never good. Apparently, she claimed she complained about the makeup and Drew just took it as a chance to take her down a peg again. But Tati, I thought your video was pretty good.

NEXT WEEK: Do we even care now that CODY’S GONE?