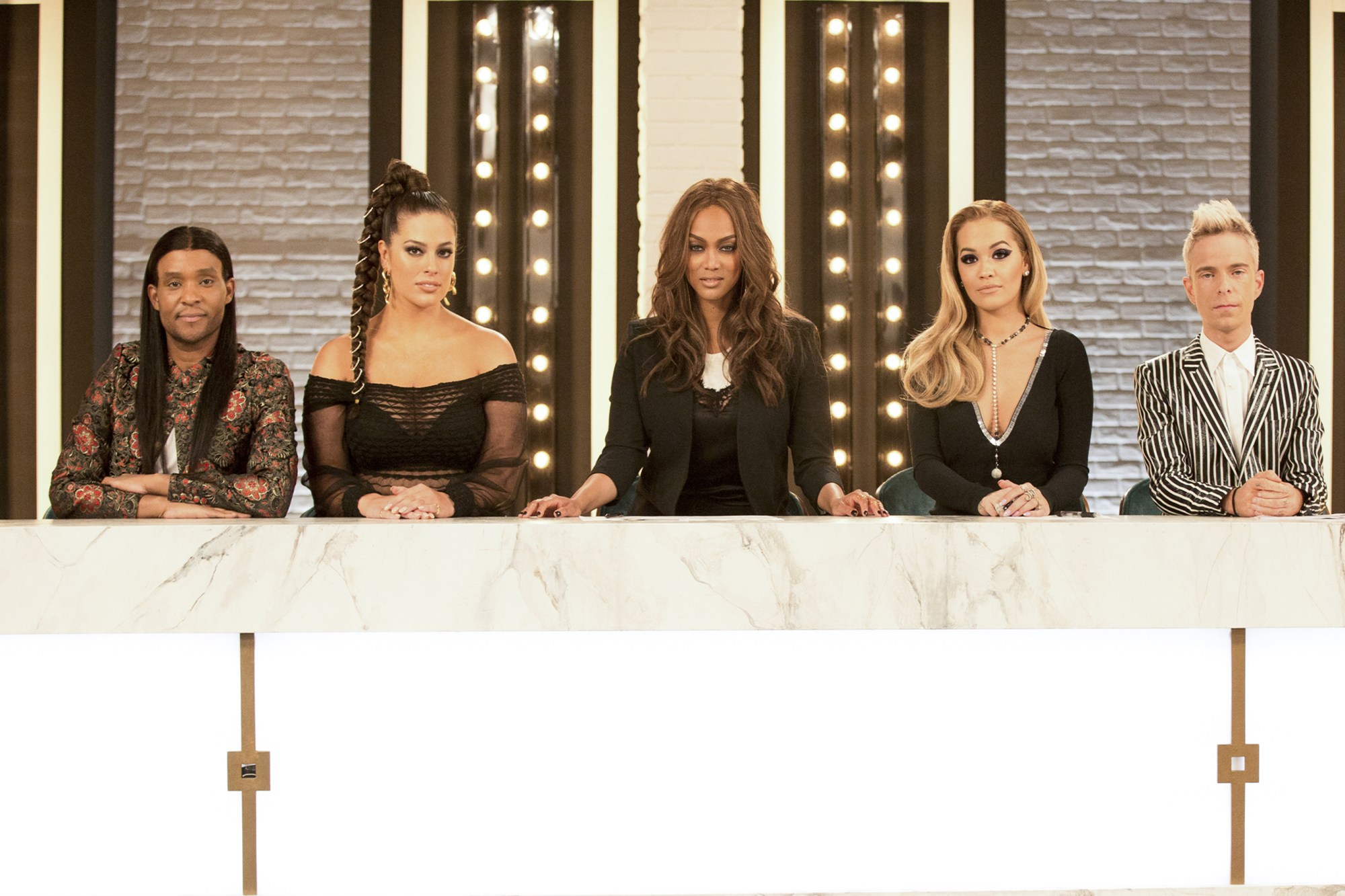 We start out this episode straight into the challenge: the multi-page shoot for Paper Magazine. India’s like “it’s the last chance to impress them.” but DON’T WORRY INDIA APPARENTLY PORTFOLIOS MATTER FOR NOTHING AND YOU, WITH THE BEST PORTFOLIO OF THE TOP THREE, CAN STILL LOSE FOR POOP REASONS.

Charlotte Rutherford will be shooting the ladies and she has an amazing portfolio. This is one photo shoot I am supes jealous of.

It’s a multi-page shoot and Coryanne is all “do you think we’ll have a different outfit for every page?” LIKE SHE’S NEVER READ A FUCKING MAGAZINE. And then she’s like “I feel like I have a lot more to prove” because SHE DOES because she’s JUST OK because WHY IS SHE IN THE TOP 3?!

I’m glad they dyed India’s hair though cause the purple was draining out. It looked pretty bad. But India, surprisingly, has the best overall view of her ascending this season. Which probably helped her. Girl was a silent threat and made it here so kudos to her.

Photo shoot seemed to go fine for everyone. India dropped a little toward the end. But it was all fine. Which means boring. Which means why are we even here, ya know? Like on this couch, on this Earth, on this plane of being?

Something something boring boring.

It looks like Rita can’t even believe these are the top three. And/or she’s still tired.

She says final runway is coming and does this super weird side eye to look off camera like “wtf? these three? These are the people I’m supposed to say?”

Oh no. Is someone keeping Rita hostage and feeding her sleepy pills? And letting her show up to ANTM to do the Ritalert things? Do we have a Richard Simmons situation on our hands?

Then the girls do some improv and object work answering questions into a (fake) mic and the improviser in me wants to give notes. First off, this is a weird microphone you all are holding. Second, India, Tatiana asked you first and you handed off to Coryanne. You know the answer. Just say whatever pops into your head first at the top of your intelligence. Don’t think. Coryanne, would you be up on a mic that close when you answer? And India, you’ve designated yourself the reporter. How would a reporter really react truthfully to that moment with Coryanne. Tatiana, good job not pulling focus but don’t drop your character. You started the scene. Make sure you get in there.

Coryanne then says, in a confessional, she’s a quadruple threat and THEN ADDS A FIFTH BULLSHIT TITLE (“host?”) because it’s Coryanne. What. Is. Coryanne.

After Coryanne’s confessional, they jump back into the improvised interview, with Tatiana leading but IT’S LIKE THEY DON’T EVEN CARE ABOUT IMPROV.

(Side note, somehow they gave India my hair – but purple)

The models show up to where the final runway will be to see the four judges ready to be like “Oh heeeeeey.” Also Rita is in a weird purple velour dress thing. I need to meet her stylist.

Then Law says THE ONE THING I ALWAYS HATE TO HEAR EVERY FUCKING SEASON: the rest of the eliminated ladies will be on the final runway with these three. Fuck. That.

Look, they were eliminated. Leave it. It never makes any sense! You didn’t think they were good enough to make it this far and yet THEY GET TO DO THE FINAL CHALLENGE OF THE WHOLE DANG SHOW?! It’s never made sense to me. Kyle? Krislian? For real? Though, confession, I am glad Paige and Cody get a chance to be like WTF?!

The Blondes come in and are really gracious about being excited to work with ANTM but I want to be like “You’re working with eliminated models!!” But their outfits are A++. Again, I’m jelly.

As they’re waiting to get set up, the only person this season who I have wanted to be a judge shows up. STACEY MCKENZIE. I want to hug her. She also singles out Tatiana for energy and makes her redo her runway walk over and over which I’m sure helps the ego. (not.)

It’s time for final runway! This is the moment where I regret not buying the second box of Girl Scout Cookies. Always buy two boxes. I would be eating those right now.

Anyway, I wonder if the judges are watching Cody and Paige and being like “oh, we fucked up didn’t we?”

I want to like Coryanne because she is gorgeous but she’s also not exciting. But she threw up her arm at the end of the first runway and that was fun. So I guess she exists or something. Tatiana and India did great too.

Tinashe comes out after the initial modeling to do her song performance while the ladies drape her. And it looks like NONE OF THEM KNOW WHAT TO DO. I mean, what is this thing they’re doing? They all look so awkward. What is this?

Then the ladies change outfits.

Apparently this was really stressful. People shouting. Sweaty models. But they worked it out.

India did an arm thing too this round and that was fun. Coryanne and Tatiana also did fine.

The three ladies come out for their final poses. Coryanne does a weird twitch which will probably look great or something. I mean. I can’t predict a damn thing anymore.

What is with the camera and Rita’s makeup pans? It. Is. So. Distracting. I’m glad I don’t have to deal with them anymore.

The whole color palate of this panel is So. Boring. For the finale! I should have known it would be boring.

Ok, so Rita explains that they’re going to review the Paper Mag spread first and then eliminate one lady immediately. Mmmmm.

Coryanne’s photo is next and it’s FINE. Everything has been FINE. That’s the PROBLEM. Nothing has been GREAT. (and Law actually calls her out on this so woo!)

India steps up and is a big ole disagreement with the judges as to whether or not she’s a boss. But judges, she’s been the most consistent of the ladies you got up here. And this photo is the best of the three. So GUESS WHAT? Fuck the three B’s. She’s the best model in front of you.

After they talk about India, they eliminate Coryanne. Again, Coryanne should’ve been gone LIKE SIX ELIMINATIONS AGO. She’s beautiful but middle of the road model.

It’s time to breakdown the runway walks for The Blondes show. India shows confidence and Tatiana shows boss. The downside to India is that she crossed her legs once and the downside to Tatiana is that “she’s a superstar” but also, while she’ll book a show, she won’t be the star of that show. Ya judges! Way to make sense!

Ashley LITERALLY STARTS HER JUDGING OFF with saying “as a supermodel” and says supermodel again while deliberating in case you forget that she also knows other supermodels. The editors must know this was ridiculous because they put in another Rita looking off at the side with an eye that’s like “you believe this shit?”

They fight a little longer about nonsense and then THANK THE DEAR LORD Tyra shows up.

They bring Tyra into the judging process and explain how Cody and Paige should be…nope, ok, they discuss India and Tatiana’s strengths and weaknesses. And Tyra one ups them by bringing in the Kardashians. Tyraaaaaa <3 you.

And then Tyra breaks it down like a SAGE PHILOSOPHER and asks them EACH what they are looking for. It is glorious. I wish I did not have to wait until the final episode to experience it.

Then Tyra leaves them. NO GIRL JUST CHOOSE THEY DON’T KNOW WHAT THEY’RE DOING.

So then they go back to the four judges judging. And I can’t care about what they’re saying. Aside from Drew. Drew, I <3 you too.

Tatiana and India come back in AND THE EDITORS PUT IN A WEIRD ASS MAKEUP PAN. They had to be like “one more. ONE MORE. Just cause. Gotta piss Steph off one last time.” So fucking distracting.

Anyway, right, India wins. Duh. I feel like Law and Ashley were told to argue against her because someone had to but if they had given it to Tatiana, they’d be dumb. I would’ve not even put up a recap and just been like “They’re dumb bye”.

So India wins. Cool. I wish I was more thrilled about this. All this. This whole season.