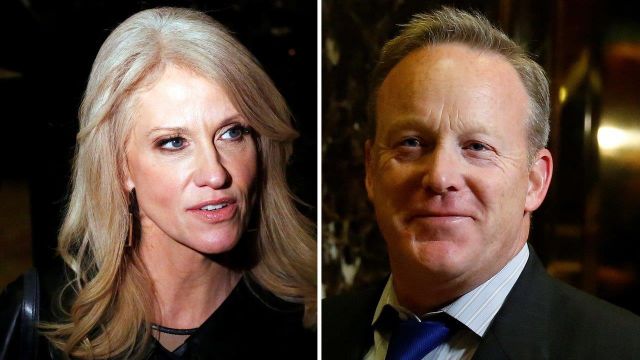 Hey folks. It’s me again! Kellyanne Conway. Friendly White House advisor. The Hot Goss asked me back to answer more of your parenting questions! I’m not in the job of having advice so this week, I’ve asked my good friend and fellow parent Sean Spicer to guest answer.

I read my sixteen-year-old’s diary and saw she was thinking of losing her virginity to her boyfriend. I don’t want to let her know I read it but I want her to know she can talk to me. What should I do?

Sean Spicer: Don’t worry. She doesn’t mean “virginity” specifically. She’s using the word to mean broadly, hand-holding and other activities. I wouldn’t read into it and I would definitely forget about it as soon as you can. She’s a teenager so there’s going to be another dozen things that she says or does in the next week that will make you forget about this. Also forget about having her release her report card from last quarter. Stop asking her to release her report card. She already said she’s not doing it. And there’s probably nothing even troubling in there. No one cares about it.

I moved to a new town and want to host a party to meet some parents from my kid’s class. Thing is, there are a few moms who are known for spreading rumors. How should I handle this?

Sean Spicer: You don’t have to invite everyone to the party. Only invite the parents who will treat you nicely and say the things about you that you want to hear. The other moms will realize that everyone thinks they’re fake. Plus, it’s not like they won’t hear about what happened at the party afterwards. But the filter of praise will be there along with their recap.

My five-year-old is suddenly afraid of the dark and says there’s a monster watching him as he sleeps. What should I tell him?

Sean Spicer: Oh, I think Kellyanne will agree with me on this one: the microwaves are definitely watching.

Yes, shut off those microwaves. Thanks Sean!