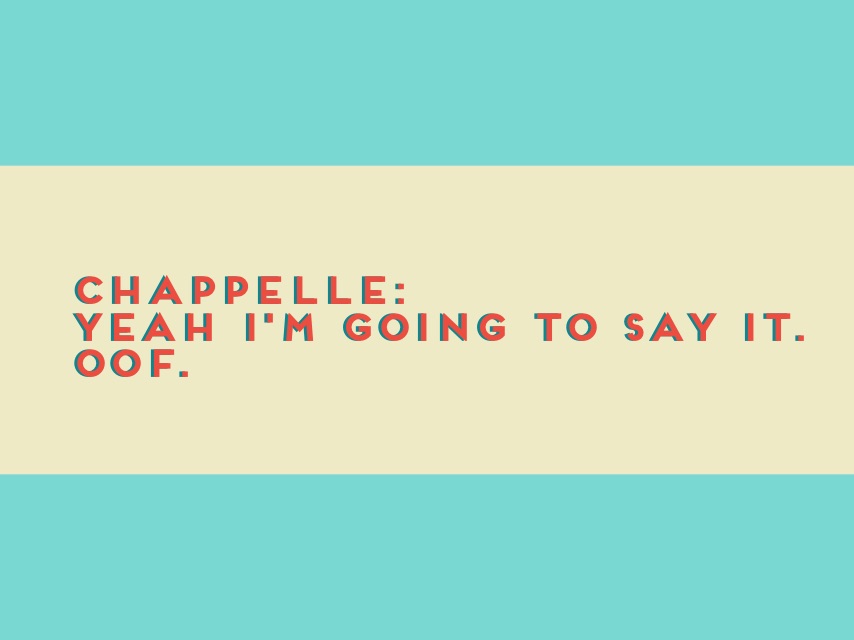 I watched the Dave Chappelle Netflix specials last night. And, first, I gotta say, it was a lot better than I thought it would be. Granted my expectations were supremely low. Chappelle has been doing shows on and off for the past few years and I’ll say it, I was one of apparently very few people that didn’t get a super hard dick when he hosted SNL. Yes the moment where he talked about the BET party at the White House was beautiful. Yes his discussion of Black Lives Matter was relevant. But I was worried some of his language seemed to discount Trump’s campaign promises. Granted, at that time of the airing, all I wanted was for someone to really skewer Trump, so I wanted blood. That’s my own review bias, I’ll admit.

When Chappelle’s Show was on Comedy Central, I was in college. Prime Chappelle’s Show demographic. But I am a cis woman so…. sometimes…Comedy Central didn’t actually think I was in their demographic. Because of my vagina, I guess I don’t love the comedies? Which is kinda crazy when you think of it, because a vagina literally looks like a big ole smile ‘tween your legs. But I do love comedy. I’m a comedian, so duh. And at that time, comedy and music were all I ever talked about. My female friends and I went to see Stella when they came to our college, dressed like the Reno 911 cast for Halloween, and ALWAYS watched Chappelle’s Show.

However, I could also see what was happening to Chappelle in real time. The white frat dudes on my campus would routinely quote that fucking Lil Jon sketch constantly. In bars. Walking to classes. At parties (JK I never went to frat parties). And I could see the show’s demographic doing the exact opposite of what Chappelle intended. Instead of opening up these fuck-faces eyes to the horrible shit black people constantly put up with, they were using it to make black comedy into a caricature of itself. Black people weren’t in on their own jokes anymore. The jokes were being co-opted by white assholes. Ahh sweet sweet appropriation. Us white people love it so so much.

Oh white frat dudes. Thanks for ruining this.

And now, I guess, those white frat-dudes are writing comedy reviews. And the mere mention of a Chappelle special sent their heads so far up their asses they forgot that a lot has happened since HBO’s Killing Them Softly and “I’m Rick James, Bitch”. Let’s be serious, Chappelle has been out of the game for about ten years. And in ten years, A LOT has changed. We had a black president, nominated a monster for our next president, and nowadays, Comedy Central even includes women in their demographic sometimes. SOMETIMES.

So when I say my expectations weren’t high, I was probably in the minority of people who watched these Netflix specials. I’ve routinely watched my comedy legends come back and not be great. Because they aren’t on the game as hard as they once were, or they are experimenting with new stuff, or I’m a lot more jaded because I do comedy, or you can’t ever see something for the first time again. But, there WAS some great shit in these two specials.

My favorite thing about Dave Chappelle has always been his reactions, his body awareness, his impressions, and obviously, his pointed social commentary about being black in America. I know that one of his intentions is getting you to look at a different point of view than you would ever consider. He’s great at taking you on a circuitous route to an opposing viewpoint without ever having to say the dreaded words “Lemme be the devil’s advocate on this here for one sec”. His Bill Cosby run and OJ bits DID pay off for me. Yes even though he asked us to see rape as a forgivable offense.

And when Netflix paid Chappelle $60 million they probably didn’t anticipate that Trump would be nominated between the filming and the airing. So I get that some stuff is going to feel a little stale for that reason alone. America has changed more in the past 5 months than that one male friend you have that was just recently dumped. We get it; you are only into you just taking care of you right now. Like you weren’t doing that before, dude.

Woof. In those two specials, Chappelle used the words “Tranny, Fag, Dyke” with no payoff. Hahaha! Women with short hair who wear flannel are unfunny “dykes”. Feminists aren’t funny. Transvestites and people who identify as transsexual are the same thing and both are like, “Whaaa? Why do we choose this weird lifestyle?” Gay men having sex is a weird fetish! We found out that Japanese and Filipino man aren’t masculine; which means they are less than. HAHAHA! Get it?? (Sorry to spoil all these great jokes for you.) And let’s not forget the weird vaccination bit or the confusing “I’m your ally! There’s not a suffering competition – but I’ve suffered more! And rape is a joke!” run. Woah, now that really said some stuff that I hadn’t thought about before.

Now before you say to me, “Listen you unfunny feminist, you didn’t get it / you take language too seriously”. I say, guess what, fuck-face, we don’t get that liberty anymore. Language IS serious. We have a dude in charge right now that takes language and makes it meaningless every. single. day. You can’t have your Trump outrage cake and then tell me “Chappelle didn’t MEAN those things. He was kidding.” Sorry guys, it doesn’t work like that anymore. Remember, Trump was also “kidding”.

But I’m going to hold out hope for Chappelle’s third special, which will be out at some point this year, and will hopefully have post-election material. And maybe he’ll read between the lines of the white dude hand-job of a review he’s getting from Vulture and AV Club, (where they barely touch on the cringe-inducing parts of his specials) and he’ll adjust some of his language in his next special. I’m hopeful for that too. Though after this LA Time’s story, maybe this jaded feminist blogger should just stick to watching this clip over and over while reminiscing about the “good old times”.

Shut up every other bit. This bit is the best bit in the world.