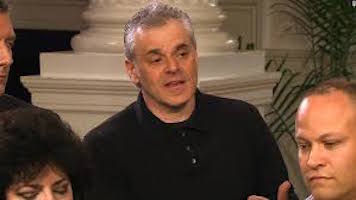 Real picture of the alien spaceship. Courtesy of Movieweb.

It was a cool day in November, 2016. I was excited to vote a white man back into the office of president. Everyone at my polling place was excited. After voting EVERYONE chanted “Trump that Bitch”, Trump’s famous campaign slogan. Upon exiting the polls, legal voters high-fived each other, slapping the Dorito dust off each other’s hands so vigorously, it looked like a Cool Ranch Tornado was getting ready to touch down.

When all of a sudden, descending from the Dorito clouds, a giant alien space ship appeared. It slowly floated down right outside of the polling place and landed in between two parking spots, right next to my F-150. A gate opened up and weird lights flashed all around.

The next thing I saw will blow your mind. Five million aliens came out of the ship. FIVE MILLION! I know what you’re thinking, Gerome, how can you look at a group of aliens and know how many is in the crowd? And I gotta tell you, approximating crowd numbers is just something I’ve always been good at.

The aliens had big eyes and green skin. They seemed to talk to each other telekinetically. The aliens stood about five feet tall and were super skinny like Ray’s girl with that eating thing. They were naked but didn’t seem to have any genitals. I looked. Look it’s not gay if they’re aliens. 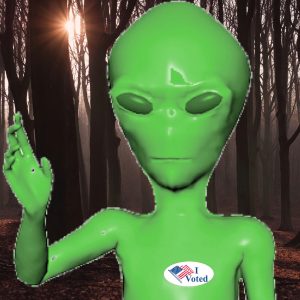 Shillary voter in the flesh

The leader alien slithered up to me. He could tell I was the bravest. And I shit you not, he said to me, “Is this where we vote for Hillary?” Shit. You. Not.

I tried to stop them, but their weird alien powers made me freeze. I couldn’t move. But as I was stuck in time at the polling place, I swear I bore witness to 5 million illegal aliens voting for Hillary. As the last alien put on his “I voted” sticker, I was horrified that Trump wouldn’t win. The great white hope was being stolen from my very eyes.

The aliens boarded their ship and off up into the sky they flew. I stood there for a long time, still frozen by their telekinetic powers. But when I was finally released, I ran back in to the polling place and asked if all the aliens had voted. They had. And they all voted for Shillary.

Now you’re probably thinking, Gerome, “Why are you just now saying something? That’s an amazing true story and we need to get those alien bastards for fucking with our freedom.” Well after Trump won, I didn’t think there would be a point. But hearing Josh and his buddy talk about busloads was disheartening. We all know what we saw. And we need to tell the truth. It wasn’t busloads. It was a spaceship, and those mother fuckers need to step up and tell everyone what they really saw.