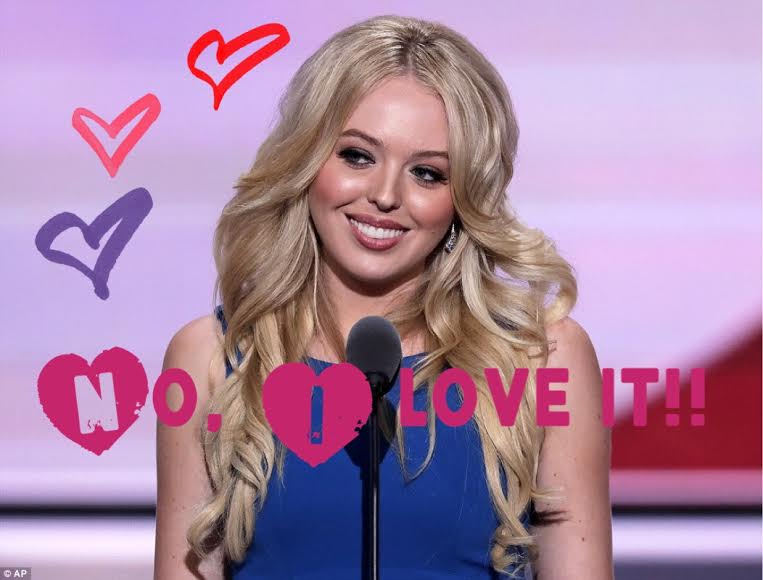 “I love it” Tiffany Trump said and then laughed and laughed and laughed, as she watched her older brother make a huge bonehead mistake. Then she adjusted her huge sun hat, kicked up her feet and had another sip of her frozen strawberry margarita.

Tiffany is finally basking in the glow of the fire that is coming from the White House. All throughout the 2016 election it was pointed out that, clearly Tiffany was not one of Donald Trump’s chosen children.

With lame-ass Donald Jr, beloved (too beloved) Ivanka, and creepy AF Eric, taking center stage during the election. Tiffany was simply dubbed, the Other Trump.

We all laughed and laughed. It was so clear the Tiffany was a dud. That she was ignored by her father. Let’s never forget, Donald is proud of all of his kids. However, he’s proud of Tiffany, “to a lesser extent.”

But maybe, just maybe, Donald loves Tiffany the most.

Nah, he for sure doesn’t. But, who knew that being the least loved child of a dumb rich baby man, would be the best thing that could ever happen to you.

For most of her life, Tiffany enjoyed the perks of being a Trump (steaks, buildings, gold toilet paper, etc) and most of us have still felt bad for her. We were sympathetic to the narative that she wasn’t loved by her father. Some of us even identified with it.

But, Tiffany played the game and she won. She’s legit on a boat in Europe right now, while her siblings fuck up and try to cover up.

So, fuck anyone who says “I have so many problems, because my father didn’t love me enough.” Tiffany Trump knows…