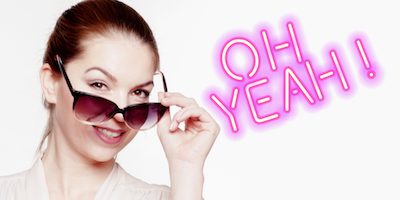 Trump Handshakes! They are everywhere right now. Donald Trump has been wheelin’ and dealin’ all his life so he SHOULD know that the best first impression Is. That. Handshake. And since President Twoscoops been meeting all kinds of world leaders the past few months, he’s had to shake a looooot of hands. Frankly, watching all these Trump Handshakes has got us feelin’ super horny. Yeah. These handshakes got us thinkin’ bout fuckin’.  And when we see something 2 hawt 2 handle, we turn it over to our good friend Spuds Mackenzie – the KING of fuckin’ – to let us know how hawt those handshakes are.

Please be advised the best way to watch these handshakes, is with this song playing:

The first of many Trump handshakes. Check out that hawt hand pat and Abe’s eye roll at the end. Ooooohhh yeahhhhh. Let’s get that Spuds reaction:

Oooh a “Three Ladies Shaking their Boobs and Spuds in a Tux”. I think we all know, on the Spuds’ Scale, that is one hot tamale.

2. Angela Merkel and Trump get Icy

The crowd wants a handshake. But Trump won’t give one out just cuz you want it, you gotta reaaallly want it.

Ooh icy. Playing it cool. Let’s see where it ranks on the Spuds’ Scale:

Oh man that’s a total “Spuds on the Slopes”. Ice cold. The lowest of the low for a Spuds ranking. Merkel better learn how to spice things up. We’re losing our lady boners over here.

Now this is what I’m talking about! SHWWWIIINNNGG!

Classic. A “Spuds on the Guitar, Back at the Chalet” – about a 3 on the Spuds’ Scale.  But nothing’s sexier than warming up by the fire after a long day on the icy slopes. Just listening to Spuds play Extreme’s “More Than Words” while we all enjoy an ice cold Bud Light. Couple more Bud Lights and who knows where the night will take us?

Here’s a confusing one. Trump gets denied the shake. But she comes back for it in the end. Like they ALWAYS do.

This isn’t quite a Merkel, but what does Spuds think?

Oh snap! A “It’s Hot Outside, but if I don’t Get What I Want, I’ll just get in this Pool and Cool Off”. That’s about a four. Polish First Lady – you better bring your fuck game to the handshake party if you want to win.

Trump knows the ways of the world. And he shows us by going in for the French double kiss.

But Trump doesn’t just stop there! He also tells the French First Lady, Brigitte Macron, she’s “beautiful” and “in good shape”. Man this guy knows how to play the handshake game! Spuds what’s your thoughts???

Daaaaamn! Spuds just gave this the “Business Hot Tub” rating. Keeping it hawt (like by telling Madam Macron she’s in great shape)  but also keeping it profesh (going in for that double kiss). Couldn’t agree more Spuds. Couldn’t agree more. Women love it when you tell ’em they are in good shape. Especially in a professional business setting.

Ahoooooooga! That is ONE. HAWT. HANDSHAKE. Trump even goes for a little squeeze reach around. This has GOT to be high up on that Spuds Scale!

DING DING DING DING DING! Holy Shit! That’s so hawt it’s a “Spuds at the Beach on a Skateboard with Four Bikini’s Ladies”. That’s the hottest ranking there is! Shew that’s some serious hotness coming from America’s King of Fucktown – Spuds Mackenzie.

Thanks for your help Spuds! We couldn’t have made it through all these hot Trump handshakes without you. And stay tuned till next time for classic Trump handshakes, including the “Mike Pence” and the “Geb Bush High Five Twist”. You’ll be so turned on, you’ll need to leave work early.  Like we’ve gotta do now. Cuz in the words of Spuds “Woof”. We. Are. Spent.