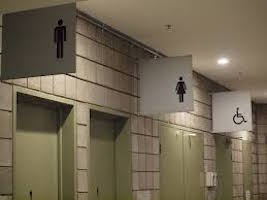 North Carolina MUST be needing some attention right now. Jesus. From HB2 (aka the bathroom bill) to McCrory v. Cooper, to McCrory making movies to limit Cooper’s power in last minute sessions just last week, ya’ll look thirsty. You’re the kid in the class who only knows how to get attention by doing stupid shit. And congrats, ya’ll have had our attention for a long time because of all the stupid shit you’ve done.

But let’s talk a little bit more about that bathroom bill. Why did North Carolina pass HB2? What is HB2? And how did it cost McCrory the governorship?

We Begin in Charlotte

In March 2016, the state of North Carolina passed HB2. It was passed to counter law an anti-discrimination ordinance passed by Charlotte in February 2016 (this is bipartisan politics in action folks). Liberal Charlotte thinks discriminating people based on gender identity or sexual orientation in public accommodations (aka bathrooms – god only my dad calls it accommodations, Charlotte), is a load of bull-shit.

In 2015 Charlotte attempted to pass this ordinance in another form, and it failed, BECAUSE IT DIDN’T INCLUDE TRANSGENDER PEOPLE. So they were like, no we gotta include Transgender people, because that’s the whole point.  Uhh, Charlotte, if I wasn’t already married…is anyone else hot? I feel so hot all of a sudden

So they ran the ordinance again, this time including Transgender individuals, and she passed! Hooray!

But then the representatives in Raleigh got pissed they weren’t getting any attention. They held a special session to introduce and pass HB2. It seriously passed in 11 hours.  Huh. Feels like maybe ya’ll didn’t think about that to the extent you should have. I haven’t seen a decision that rushed since I bought that ill-fitting jumpsuit for that wedding I went to last year. I wore it twice tho.

So that was a good use of the tax-payer’s money. Good work North Carolina. You know that this wasn’t an issue you all needed to deal with. I mean let’s look at where you rank in the US on education level – oh dang. Ya’ll number 36.  Out of 50.  Maybe focus on that problem.  And that’s why McCrory lost the governorship.

So our boiz in Snorth Carolina elect Cooper, Democrat, because those less than 10,000 people knew that McCrory was wasting A LOT of people’s moneys.   McCrory goes in last week and starts limiting Cooper’s power for his term by putting new regulations in. Let’s be honest, those regulations weren’t that big of a deal, but the principle is what it’s about. America literally elected a fascist for president, and you don’t see Obama running all over the place having secret meetings appointing Merrick Garland to the Supreme Court. (OBAMA PLEASE DO THIS. WE NEED A #MERRICKMIRACLE)

Cooper says, whatevs. Ya’ll mad. But we are still repealing HB2. Then the Raleigh reps are like, the only way HB2 can be repealed, is if the Charlotte ordinance is repealed first.  So Charlotte repealed their ordinance yesterday on the condition that Raleigh will fix their shit by the end of the year.

North Carolina Reps – come over here I want to tell you something in your ear. GET YOUR SHIT TOGETHER. You are too old to act this foolish. This isn’t how adults compromise. This is how idiots get their toys back on the playground. And not to be a downer, but when ya’ll passed HB2, suicide calls for the transgender hotline doubled. DOUBLED. You’re not trying to get your ball back from Marcus, you are fuxing with peoples lives.

So NC, Nortie Carowhina, North To the Carol, please quit acting like Matthew Mcconaugheys character from Dazed and Confused. No one REALLY wants to hang out with that guy. And for sure, no one wants to BE that guy.