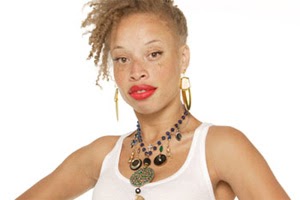 I know I’m not supposed to talk about episode one of ANTM but I guess I MISSED Phillip Plein saying “You’re here to look like a princess” and I just want to rage for a quick second cause I believe Princess does NOT start with a B which is the letter of choice in Cycle 23 for Tyra and Rita. Moving. On.

We get into the house! No power grabs over rooms though, of course, we get a shit ton of ANTM branding. But no giant portraits of Tyra. That’s cool. Probably for the best. ::cries in a corner, doesn’t know where to look if it isn’t into Tyra’s eyes::

Oh thank God! Justine is here to save me! I’m sorry your family lives in a one bedroom but what I get from the photos of them is that you’re all a lot of fun. Which makes sense because you’re adorbs.

Tatiana mentions having an advantage in New York cause she’s a Brooklyn gal but apparently she’s never seen any other season where that is not the case ever ever.

So cool, we’re all just hanging in the house, and OMG it’s a Tyra—wait what? WTF is a Ritalert? Ugh. Deep breaths. Fine. It’s a “Ritalert” on the TV. Anyway, she says it’s gonna be runway coaching time. Fine.

And who’s our runway coach? I know everyone (me) was hoping for a cameo by one Ms. J. Alexander but Stacey McKenzie is a nice second. McKenzie is a judge on ANTM in Canada, Canada ANTM, and runs a free workshop for inner city girls to learn about modeling. Also dem legs are gorge. And she definitely knows how to work them. Ah to be 5’10”.

But wait! If you thought McKenzie was the main attraction, you wrong. Welcome the “voguers” (which when I initially heard her say it made me think it was “The Vogers” and were referring to some foreign family in a neighborhood like The Burbs. I’m so glad I was wrong).

These lads from The House of Mugler kick off a WALK OFF! You know, like a dance off but with the skill every human animal conquers at their own pace, some earlier than others, but every kid is different and you shouldn’t compare advancements with other parents.

We get reminded Cory Anne’s mom is a supermodel again, that Paige swings her arms a little too much, and that BINTA IS BADASS. Oh Binta. You kill it girl.

We also get reminded of redheaded Cherish who brings it real hard in this walk off. She can’t just rely on that hair color. And SHE DOESN’T.

Binta’s “squad” wins, of course, and we quickly see that a squad is only meant for the challenge and not for the house. Duh.

Back To da House

Paige has a real, God I hope it’s real, moment:  “I want to know more. I want to ask questions…I want to be a better person. I want to take the privilege I was born into.” Seriously hope this isn’t hyperbole.

And then the conversation goes to an even bigger place with more levels than I feel adept to tackle. But if ANTM gets all up in it, I am there. That’s the kind of drama we need. Well, that AND someone making out with a male model in a hot tub abroad.

Before Stacey launches into this incredibly inspiring story of her first days as a model where everyone looked down on her and she still booked her first show with Jean Paul Gaultier alongside Madonna, she fucked up the B’s! I mean, does no one respect that Tyra said “beauty, business and badassery” in the first episode? She did! Are we just going to pretend that didn’t happen? FINE Boss, Business and Brand they are from now on. Tyra, please know, I remember. I’ll always remember.

Anyway, we go from Stacey’s tale of confidence to Binta’s “When I go into runway, there is no fear at all” which just reaffirms Binta needs no one but Binta.

While all the coaching is going on, Squad 2, smart AF, watches. Unfortunately, it doesn’t seem like they pick up a whole lot…

Male models! Into a photoshoot! Drew Elliott’s sparkly pants! So many surprises! But the best surprise awaits:

ZENDAYA! Who is so underutilized in her celebrity appearance. She picks the winner off whoever she thinks is being boss best…from a challenge where they fall onto a crowd of men. Cool cool. What?

Cherish comes out strong again, Tash worked that dress and then Justine goes from too adorbs to too awkwards. What are you doing with those legs?!

But challenge goes to Kyle, and it should. Girl came OUT of her shell and rocked it. This is a prime example of fake it ’til you make it. Maybe secretly, Kyle is a shark. She knows what she’s got. A little hand in the pocket, a smize, she killed it.

Drama in the house builds a little more cause Binta doesn’t keep her mouth shut. I mean, she’s a self-proclaimed activist. What do you expect? She sees something, she says something and the something is Paige’s supposed “extra”. “You being extra on purpose.” Tatiana throws some shade too. Poor Paige. I’ve gone a lil cray with celebrities too, it’s ok. Paige tries to confide in Kyle who looks like she DGAF. Marissa pops in to to speak for the group and tell Paige to not lose her energy AND THEN follows up with saying SHE DOESN’T SEE A SUPERMODEL. It’s too early to figure out exactly what Marissa’s motives are but Marissa isn’t dumb. Could be the start of some shit.

Ok, stop it with these pan shots of Rita! They’re straight out of a makeup commercial and they look ridiculous at judging. We don’t need 4 different shots of this shit. It’s panel and Rita’s beautiful so shoot her straight on and static. It’ll be ok.

I’m actually loving most of these shots. Way to work that pile of men ladies.

Quick shout out to Justine’s adorbs AF giggle before we get back to the supes awkward legness.

And then Krislian. Poor Krislian. All these contestants said they used to watch the show and they do shit like this and I don’t get it! You don’t make excuses at panel. EVER. Remember when Tyra lost her shit with Tiffany? This is not a time to talk back. Do. Not. Do. It. You are wrong, they are right, nod and get back in line!

It’s my prediction of twin drama! Oh Cody, the anxiety is real. We get a hug and then a close up on some twin hand holding and then Cody goes on to win best photo. WHAT SUSPENSE! But that photo was fierce.

Bottom. Two. Cory Anne, who if you missed the million times her supermodel mom was mentioned, is the daughter of a supermodel and Justine. Ugh, Justine. I’m real sad you’re here but I think we both knew it was coming. Don’t you worry. You adorbs AF and you made fans in two episodes. Everyone follow this girl on Instagram please.

Next week: Nudity AND drama? What is this, an HBO show??