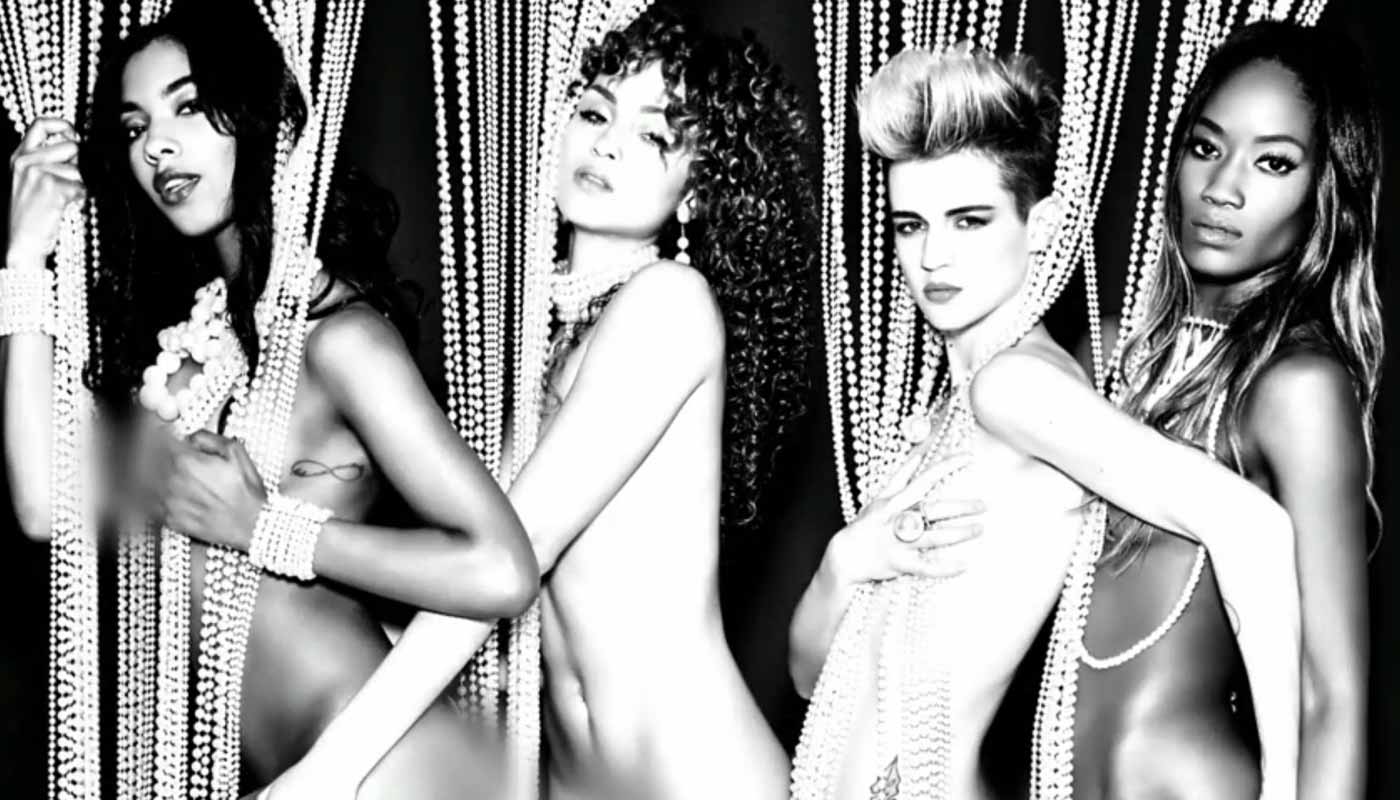 There’s a girl gone, girl. Justine (R.I.P.) was real upset about getting kicked off but it had to happen.

And now, back at the house, the girls relive Cody’s best photo. Tatiana throws Cody props and her sister Tash comes to the realization that they “share the same face. If she can do it, I can do it.” There are other parts to the body but sho Tash, tell your sister it’s THAT EASY.

And then Courtney. This quickly turns into a “we can’t stand Courtney” episode. She’s hating on the twins for being confident after the win cause that’s “personally not my style.” Well you’re beautiful so that’s your style.

Did you know Cory Anne’s mom was a supermodel? Cause she’s here to remind you but also to say “I’m never gonna have her career. And I don’t want that career. I want to be a star.” I don’t understand this reasoning since she also says her mother was famous. Isn’t that a star? Whatever. Fun fact though: Cory Anne wasn’t even raised by her mom! She lived with her dad in Bali. So….wait what?

“We expect you to raise and improve your game with every photoshoot.” Yea no shit. There’s no direness or drama to any of this. PUH-LEEAAAASE give us a Tyra Mail soon! Even Rita looks bored AF.

We get into a little headspace post-panel with Krislian lamenting the panels seeing her as a sexy Latina and Cherish vowing to “blow this photo shoot out of the water.” Wah.

Oh NO. Courtney DOES NOT FEEL GOOD. Add to the “we can’t stand Courtney” pile. Tash is all “Courtney has the supermodel attitude and I don’t think she’s quite earned it.” But I don’t know how her being sick (or faking sick?) is supermodel attitude. If anything, I would think that’s lame ass attitude but I’m not a model. Sigh.

But don’t worry, everyone in the room is gonna jump on Courtney when she asks them to go to sleep. Including Marissa who apparently doesn’t even sleep in that room! Big time stuff. ::rolls eyes::

I dunno. I’m with Courtney. That’s a sleep place. You want to do the talking, go to the living space. Don’t tell Courtney that she should sleep in the living space as to not ruin your good time MARISSA WHOSE BED ISN’T EVEN IN THAT ROOM.

Now I will also say I don’t know how often Courtney’s been pulling this shit so maybe this is a bigger problem but I stick with my sleep place vs my living place.

Did someone yell “you’re very selfish” at her when she left? For wanting to sleep in the sleep place? These girls. SMH.

Don’t worry. Giah’s putting her to sleep in the living place. “People are mad at you because you’re beautiful.” She claims they’re all talking bad about her because “she’s one of the biggest threats.” Giah keeping it real. CAUSE IT’S TRUE. Court (I can call you Court, right Courtney?) is one of my top three. Smooches.

But wait! It’s not only Giah to the rescue but Cherish is heading back into the sleep place cause she was told what happened and she’s not cool with it. You heard me through the TV Cherish! Sleep places are for sleeping.

Yes, I’ve spent this much time on an argument about going to sleep in a bedroom with a photoshoot early the next morning. C’mon ladies! The arguments last episode were way more important!!

What is this top Rita is wearing slit down the back? What does that even say? What is this world?

“Today’s hair and makeup will be a little more intense than usual.” Drew says.

“We’ve created a trademark look for each of you.” HOLD UP. Are these MAKEOVERS that you’re trying to rebrand as trademarking?! Do not MESS with me Rita. This is one of the two best episodes of every season and you CANNOT be coy about it.

They’re giving the models paper with what’s going to happen. Shit. These are makeovers. Well, I was not prepared for this…but carry on…

And we get our first flip out. Cherish is mad cause they’re going to make her a “fiery redhead” which she already is so I don’t know what her issue is. It’s not like they’re dying her awesome hair a random mixture of purple and pink. That would be ridiculous. I’m with Marissa on this one. Her freak out is “crazy and stupid.”

Oh also Cherish said this shit to Binta: “That’s like saying they would dye your skin a different color.” Naw, girl.

We are in Sally Hershberger Salon for these trademark looks. Quick shot of Cherish shooting some silent shade as Paige is giddy AF. Give it up Paige. Sigh.

Marissa’s card says “Bigger and Better.” WTF does that mean? I assume bigger hair but better implies what she already has is shitty. And then she says she’s going to embrace her bitch. Whatevs. I go back and forth on Marissa which is not good.

Add into the Cherish pile, Tash who wants to remain girlie. Don’t worry, they’re making your sister look more feminine and since you have the same face, it’s like they’re making you more girlie. Right? Did I have that reasoning right?

OH SHIT! Sally just straight up walks away from Cherish as she’s trying to explain what she doesn’t want. ::CLAP:: ::CLAP:: ::CLAP:: Rita has to pet Cherish to make it all better. This is ridiculous. They’re enhancing the color! You’re keeping all of it! Be glad they’re not shaving it off.

Ashley Graham on the scene to say you’re all gonna be naked at this photo shoot. So don’t even worry if you don’t like your trademark ’cause people are gonna be concentrating on your other bits anyway.

Hold up! We have a twist to add to the “I hate my trademark” pile: India doesn’t want to pose nude. Oh, P.S. India now has some weird mixture of pink and purple that looks like it should be on a stick at the county fair. We already did pink once before kiddos. Remember?

Also, Ashley offers up the fact that “nude celebrity photos are so popular now.” So kids, if celebrities are doing it…

Tash freaks out about being too masculine making Courtney real happy cause “karma”. And then I really don’t understand the exchange between Ashley and Tash. If it was that Tash was like “don’t want to get into it” or Ashley didn’t get it. Also, what’s this with separating the B’s? I’m left with many confused thoughts.

Purple Princess India is all “I’m not very flattered that they chose this for me.” Me. Neither. But girl, at least you ran with it. Kudos. Now, about that nudity thing.  Look, you always told yourself you would never do nudity and you probably told the producers the same thing and guess what they probably put in the storyboards for this season the second they heard that: nudity! And then they double punched you by throwing in purple/pink hair. Now I just feel bad for you. Great.

Ok, first off, I just wanna say at no point did they do side-by-side before and after and that’s stupid. Moving on.

Ashley Graham is all “look I’m naked!” and then everyone just strips and is like “I’m naked too!” I don’t…what just happened? Well, anyway.

Nothing to report back here. Pretty standard photo shoot.

India, still on the side-lines contemplating going bare. And then she does it, no break down, no heart-to-heart with Drew. C’MON I’m gonna need SOMETHING here. Nope. Just jumps in and does great. Cool cool. Also Paige does this:

Tash and Courtney are still not loving each other. Court (I’m just gonna assume I can call you Court.) is mad that Tash doesn’t know what to do with her body. Don’t worry Court, she’s got the same face as Cody. We’re all good.

BACK AT THE HOUSE…

Marissa feels closer to everyone after the shoot. “It’s not my opportunity to who who’s the biggest bitch.” So cancel that trademark.

There’s also a lot of quick apologizing on this cycle as she does with Courtney.

Also, everyone besides Marissa is real nervous. Marissa, on the other hand, feels good about winning.

Kyle kills it. She’s a silent threat. Wait for it.

Trio of Paige, India and Marissa is just eh. Well, Paige is actually awful. India is the only good one in the photo and don’t worry they kept her Rainbow Brite locks in technicolor. Rita also gives her some ridiculous rant about setting her limits with a vague story about one time she set her own limits but hey, Rita? India had those limits and she went ahead and forgot them to pose nude for a shoot on your show. So I’m not sure what your point was?

Binta! What is this nonsense! Your photo is terrible. You are Binta. You know, there’s been so little Binta this episode – and this to top it off. Binta! Don’t lose me!

Courtney kills her photo. Ah-maze-ing. You should always be sick with bars in your back. But judges are all “I don’t believe the brand and the boss” – Oh dem B’s. They’ll haunt you.

And best picture goes to: Courtney WHO LOOKS TOO STUNNED! Like why wouldn’t you think it was you? They loved it. Fuck the other B’s. Only one that matters for you is “Brows.”

Bottom two: Krislian and Cherish and I think they’re totally gonna kick off – wait, what? They kicked off Cherish! My ANTM Spidey Senses are so off! Ugh, while I would’ve kept Cherish, her dismissal did give us these pearls of wisdom:

They had me “dye my integrity of who I am in the inside”
“I did it cause I trusted them. I don’t trust nobody”
“Have fun picking your winner cause I’m a unicorn.”

Next week: Social Media, DJ Khaled, and a big ole fight between Binta and Court (It’s done now. You are Court to me.)