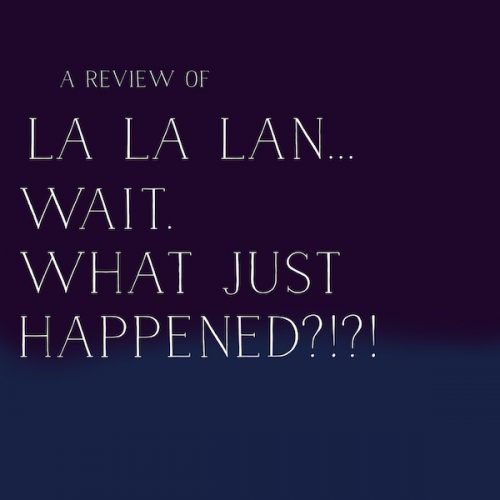 Ahhh! Movies! A nice respite from the tire fire that is the current American political reality. And what better respite than the film La La Land, a musical tribute to the golden era of Hollywood. La La Land stars teen hearthrob Ryan Gosling and Birdman co-star Emma Stone. While the stars vocal performances leave a lot to be desir… hold on a second, my phone keeps going off.

HOLY SHIT! The President Elect hired Russian prostitutes to pee on his bed???? The dude that’s supposed to be the leader of the “free world” in less than 2 weeks? He allegedly hired sex workers. And he had those sex-workers urinate on a bed in Russia? Jesus Christ. This is where we are right now? This is what we’re talking about? What the fuck is happening to our country. You know what? Forget it. I have to get back to this review.

So while the stars vocal performances left a lot to be desired, the visuals from the film were quite the eye candy! Director Damien Chazelle does NOT disappoint, especially in the last 20 minutes of the film. Chazelle’s attempts to visuall-

WAIT. WHAT?? PRESIDENT OBAMA HAD JUST STAYED IN THIS SUITE? You’re telling me, that SUPPOSEDLY Donald Trump stayed in the presidential suite of this hotel in Russia RIGHT after President Obama. And his intent was to defile a room that the President had just stayed in because he hated the President so much? This is fucking insane. This is just fucking insane. What the actual fuck. I’m not posing that “what the actual fuck” as a question. It’s a statement. Because I don’t even have any more questions for this shit-show of a political system. Just simple statements. I AM DUMBER NOW. BECAUSE OF THIS I AM DUMBER.

Ahem, anyway. Chazelle’s attempts to visually capture a lost time in Hollywood, were obviously thoroughly researched. And this is the highlight of this film. The only other highlights for me, included any scene that had a John Legend appearance. His voice was dynamic during the few times he actually sang. And every time he sang, only further –

I don’t want to know any more piss stuff. It’s fucking embarrassing. I’m embarrassed.  Oh there’s a bigger story here? Oh, I see. It’s probably part of the Russian government blackmailing the President-Elect? Cool cool. So America voted in a guy that’s stupid enough to get blackmailed by the Kremlin? Rad. No really. That’s just rad. 150,000 people in the middle of the fucking country voted in a fucking puppet of the Kremlin. ALMOST 3 MILLION MORE PEOPLE DIDN’T VOTE FOR HIM GUYS. 3 MILLION. THIS SYSTEM IS FUCKED.

Excuse me. Heh.  So  where was I…La La Land…. John Legend was good in it. Everyone else was OK, not like AMAZING or even Golden Globe worthy. And Ryan Gosling being the new Jazz savior was insulting and ridiculous. If we’re going to do an homage to the golden age, can we at least create more roles for non-white actors? And for all the haters that want to talk about accuracy, I say calm down. This is a film where two people danced on fucking clouds, that’s not entirely accurate either, is it?

Well all in all, La La Land was fine enough… I mean no one pissed the bed or anything. SO I GUESS IT’S BETTER THAN THIS FUCKING GOVERNMENT. AM I RIGHT?