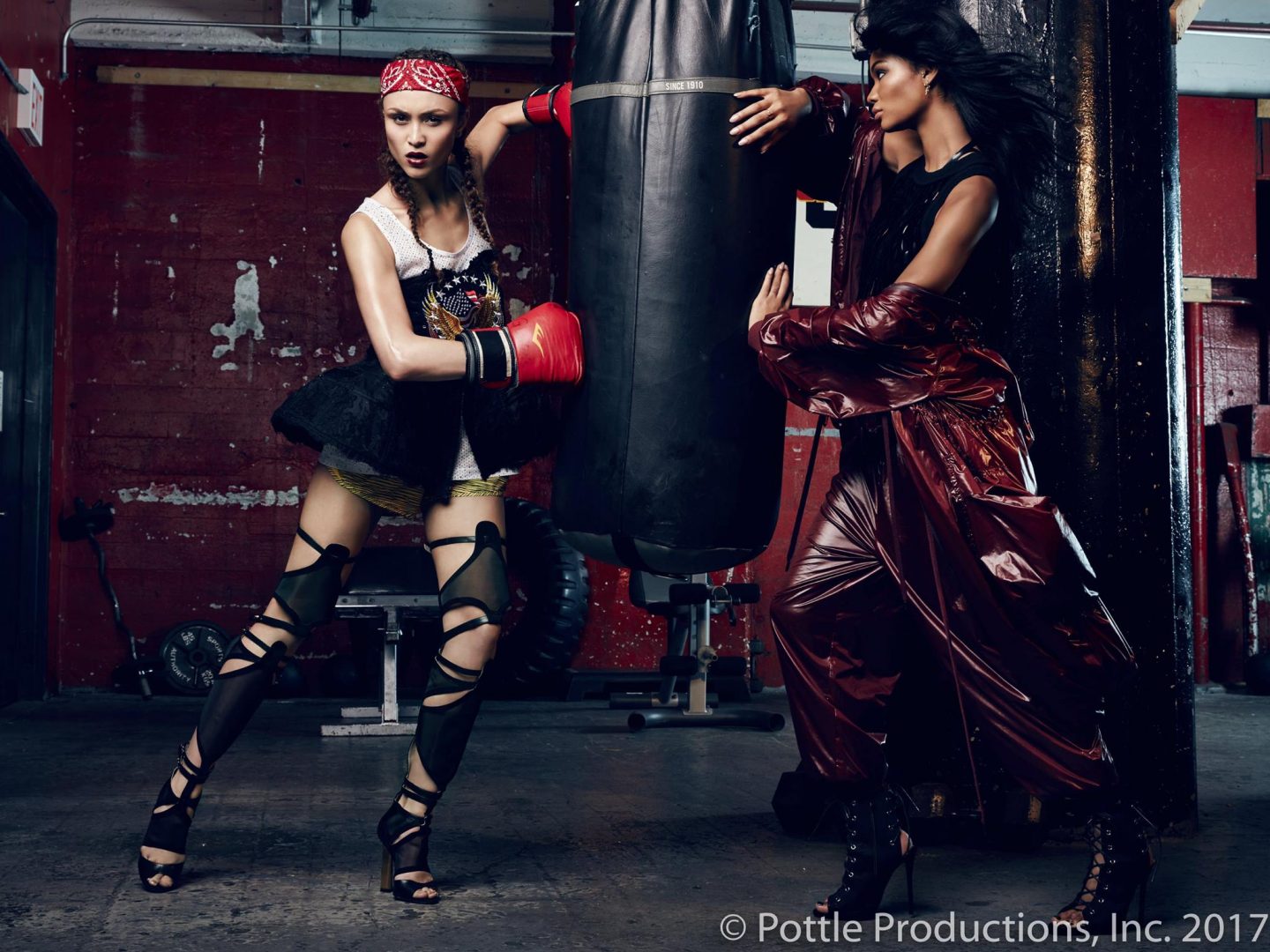 Well, we knew from last week’s preview that Kyle and Marissa are loving on each other. So it’s no surprise that this week’s episode started with Kyle talking about how “bad” she’s feeling in the competition and how she would love some “emotional support.” In walks Marissa, both figuratively and in editing. Bam. Hearts.

Then we bounce back to Marissa and Kyle and Kyle professes some deep feelings where Marissa is just kind of eh. This can’t end well.

Ashley In The HOUSE

Ashley comes over because she’s all “I don’t actually get to interact with you outside panel so here I am! And I brought wine and kale. Perfect pairing.” And right after she gets there, we get a TERRIBLE ADR JOB in editing. I mean awful. She must’ve fucked up some lines. Why I say this will be apparent in a little bit… But for now, let’s just say that she talks about body and strength and eating right and “not not eating.” Love dem doubs negs girl. So let’s make some kale pesto pasta! Ashley’s signature dish. Yum?

Krislian and Ashley start talking it up. Krislian says she’s been struggling with being sexy her whole life and that she’s been sexually harassed since she was little. Which I believe. Women go through some shit. Ashley calling out Court for her unicorn PJs while Court grabs for that magnum of Gallo wine! HA! Don’t drink too much. Headache in a bottle.

But ya know what? Thank God someone hugged Krislian. Ashley, high five.

Then the girls sat down for dinner and I couldn’t tell but please tell me that was Paige saying grace cause it SHOULD be.

Then there was a Q&A where Binta asked how to show the judges she’s a boss. Binta! They see you’re a boss! Stop it. Why would you ask Ashley that? You’re doing it!

Oh no. Ashley brought up the last elimination. Ashley, why would you hug Kris to then smack her across the face like that?? LET’S FORGET THAT EVER HAPPENED K?

And Ashley tells Kyle she wants to see her in heels. Sure.

Ashley then tours the house and peaces out. Tatiana’s like great night and then Binta’s like “This house is nasty.”

CLEANING MONTAGE! They’re having so much fun! Except for Binta.

Binta picks out Tatiana specifically which was, I guess, the wrong girl to pick out. Screaming! Yelling! Bathroom grossness! More yelling! Tatiana doesn’t clean up her hair and Binta leaves the whole place soaking wet. Living with one roommate is hard. Living with however many girls are left is harder. I’m sure they’re both right.

And it escalated to “I will hit a bitch” real quick. Bathrooms. They’re real stinkers. #sorrynotsorry

Then we got Kyle and Marissa hanging out again. I guess there’s a thing with her only being 18 but nope. They are looking past it. Big ole kiss that Marissa “wasn’t expecting”. Ya ok. I believe that NOT! (This is coming back into the vernacular it seems).

Ashley Graham on a trampoline! On a rooftop! With a view! Fancy!

AND MORE ADR. Must’ve fucked up more lines or the sound on this was bad and the guy editing it in was worse.

Alright, so they get one shot. Krislian was first and apparently almost fell and broke her neck last time she was on a trampoline. Poor Kris. Confidence girl!

OOF Kyle! What was that! That looks like a face I would make girl. And I don’t give good face on purpose.

Holy shit what is up with the sound in this episode?? THERE’S ANOTHER ADR?

Anyway, of course Paige won. She should’ve won. Girl was on fire.

Back At The House

Paige picked Tatiana to de-stress from the Binta yelling. And the whole time they talk about Marissa and Kyle?!?!? NAH you shut up and fall asleep while you get the rub down. Ugh. You don’t know how to massage.

Then the girls bond over how they want to be more toned cause there’s “always room for improvement.” Gals, you all so good looking already.

Someone get this girl a red eye from Starbucks.

“I’ve been known to knock out my competition in business.”

The girls guess they’re boxing. I would not get that from this weird pun but sure. And, of course, they’re right. I think someone’s feeding them the questions. *wink*

In high end editorial, boxing is so trendy apparently. At least according to Ashley. I am learning so much. We’re working in motion on this one which, Drew says when it’s done wrong, is horrible. LET’S PLAY.

Ashley comes back into makeup and introduces Chanel Iman. Who is gorgeous. And will be modeling with the contestants. K. Not intimidating at all.

Tatiana does a lot of kicking in her photo shoot. Cory Anne does a lot of punching. Courtney does some ribbon work. Paige is having some issues but they fixed it with a jump rope. Binta does what she does best and screams.

Then of course there’s Marissa and a shot of Kyle watching Marissa. And then Kyle gets up and gets distracted by Marissa while shooting with the gorgeous Chanel. But also, she had the weirdest set up with very little room to move. Or is that the difference between a good model and a great model? Ugh who the fuck knows.

Krislian says she’s more of a dancer and already starts with confidence dropping quick in the shoot. QUICK in the shoot. Even with Ashley there cheering her on.

Cody, I love this coverall they put on you! LOVE it. I assume you’ll get an amazing photo with it to.

Kyle and Marissa sitting in a brownstone K-I-S-S-I-N-G. Kyle pulls out the big guns though and comes right out with “I just want to fuck you”. Which Marissa flips out on. And then Kyle follows her with a confessional that she wants to work on Marissa’s anger. This relationship is all over the place. Then Marissa says Kyle’s needy, Kyle says Marissa’s being difficult, then Marissa kicks over a table. Then Courtney says Kyle should separate herself and does the knife sound from Psycho. Kyle does not heed this advice and instead follows Marissa back downstairs where she’s talking with Cory Anne and is like “Let’s just go to sleep and wake up tomorrow like nothing happened.” Courtney then stands there with some white shit on her face, just to antagonize, I know it, don’t deny it Court. And Marissa calls her out and Kyle does some weird gesture like “get goin”, and Courtney’s like “ok Kyle” and Marissa makes it worse. She’s like “don’t mess with me when I’m not in the mood.” Now MORE SCREAMING. Everyone is loving the screaming this episode. And Kyle can’t do anything but put her head in her hands. And then we cut to commercial!

Rita’s back with the makeup pans. Boooooooo. Law and Drew got mini ones too. But not Ashley! Who chooses these things??

Courtney – well this photo is not your best…

Kyle wore heels as per Ashley’s suggestion. And is not rocking them. Anyway, the photo, eh. But it was not easy. And the “being more open” suggestion is good too.

Marissa bringing it a little more week by week. Ooooookay.

Tatiana kicked a lot. Which shows up in the photo.

Oh no. Drew called out Paige! They switched it to a jump rope because that’s what a cheerleader would do. Ugh. Whatever. It was a good photo and girl took the criticism like a champ. High five Paige.

Binta! Always. Don’t listen to Law. You can compete.

India – eh. But I always think of you as middle of the road anyway so at least I’m on the same page as the judges.

Krislian – Ashley is hugging you! Rita giving some very nice constructive criticism. And Krislian LIKE A CHAMP as always.

Cory Anne – they love it. I…like it. It’s very good. But I just – I need another week or two to get there.

We got to judging WITH SO LITTLE COURTNEY! High five Courtney.
Krislian – Ashley has a connection because it’s “her story”. But Drew’s not buying it. I heart you Krislian. You so sweet.

BEST PHOTO: Cory Anne. I’ll give you this week. Cody second photo for the second week. I would’ve given you #1 both weeks Cody. BUT Cory Anne, you def got this week.

BOTTOM TWO: Kyle / Krislian we all saw this coming. I’m sorry Kris. You still got the Instagram followers! You’re gonna get going. You are stronger than this!

NEXT WEEK: Beyonce’s choreographer and a music video! Krislian would’ve killed this!