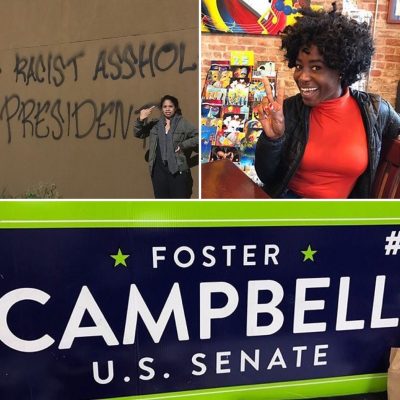 “I’m going to New Orleans to campaign for Foster Campbell”, I’d proudly tell people. Honestly, I had done very little studying up on Foster Campbell, I just had my sights set on the bigger picture WE NEED THE LAST REMAINING SEAT IN THE SENATE. As I waited for my Spirit Airlines flight (because I ball so hard) I cracked open my laptop and started googling.

As I read more and more about Foster’s pro-life stance, my heart began to sink a little. A woman’s right to choose is a subject very close to my heart, in fact I work as a volunteer at a women’s clinic escorting patients in and shielding them from protesters. You can imagine my conflict, but, WE NEED THE LAST REMAINING SEAT IN THE SENATE and Foster Campbell does have his merits. He supports an increased minimum wage, he’s exposed corrupt, illegal overcharging by prison phone companies and he isn’t a climate change denier (the last one is a low bar, I know, but look at what we’re currently working with).

After a brief and surprisingly easy flight I arrived in NOLA excited and ready to go. My friend Leann and I hopped in an uber and began campaigning right away.

“Are you aware there’s is a run-off election this Saturday?” we asked our driver, let’s call him…Frank.

“Yeah but I’m not really interested in politics” Frank replied.

We asked Frank what he did, why he (a man who needed 2 jobs to survive) didn’t believe in a minimum wage? We hit Frank with facts about why he should vote, why he should vote for Foster Campbell and how much his vote was needed. We were READY.

When you canvass you are directed to a site that shows who is a registered affiliate of which party. In the final days before the election we were only reaching out to known Democrats to encourage them to get out and actually cast their vote. Day 1 and  2 found us in mainly suburban, largely white areas. Of the houses (eligible/registered to vote) about 40-50% were registered Democrats. We would knock, ask if they’d voted early and if not, encourage them to devise a plan to vote as soon as they could on Saturday when the polls opened. People were mostly nice. But as the sun went down people became less patient and more irritated by our presence….

Part 2 found in this weeks’s newsletter