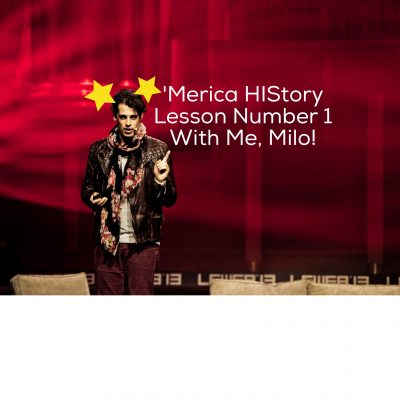 Heeeeyyyyy World! It’s me! MILO!!! The great defender of the Consitushion!!! Now last night I was SUPPOS’D to speak at Nazi commune aka University of California – Berkley, but the Nazis started a big old fire and I couldn’t speak.

I know what you’re saying, “No! I love Milo! How could he not speaks! That’s censorships!” I KNOW! Those Nazis are trying to take away my American First Amendment. Which says I can say whatever I want whenever I want espeshially if it means I am promoting hate speeches.

So I thought, “You know MILO, I don’t think the peoples understands the Consitushion! I should teach the peoples.” But then Milo realized that to understand the Consitushion, you need to know a little bit of ‘Merican HIStory. So I’m going to stop in here every once in a while to give a brief HIStory Lesson.

LESSON 1: HOW WE GOT IT STARTED IN HERE BY MILO

Where did ‘Merica come from? Good question, Milo. I looked at the internet for informashion. To find out where ‘Merica started, you have to go all the way back to 1933 and the end of the Weimar presidents. After this First Big War, people were like, “we got no foods and stuff”. And Weimars came in and said, “lets make consitushion!” Which was good. ‘Cause you need consitushions for Milo to make speeches. But then Weimars were bad ’cause it was all Weimars fault for not having any foods after First Big War. Bad guys say it was ’cause of Versailles Treaty. But actually it’s ’cause of Weimars who were saying stuff like “let’s build a better country with railways”. Milo is eyerolling emoji TOO right now. ONLY FOCUS ON FIRST AMENDMENTS!

Next time we’ll learn more about him in ‘Merica HIStory Lesson #2 Who Dat Hitler Dude??

And now the womens who own this blog here are saying Milo gotta go. WHICH IS TAKING AWAY MY FREE SPEECHES! THIS ISN’T FAIR TO ME!