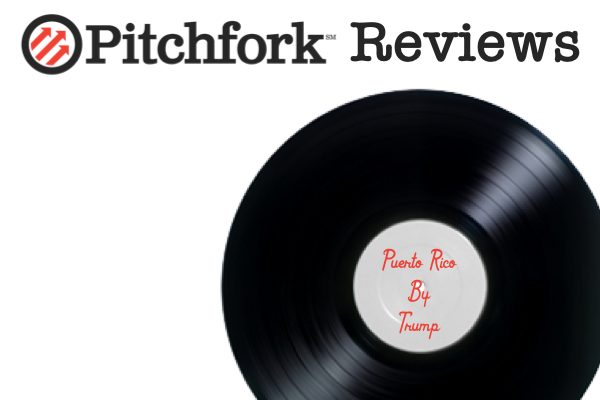 Today, Trump gave himself a 10 out of 10 for his cleanup work in Puerto Rico after Hurricane Maria decimated the area. But indie music blog Pitchforkmedia, known for it’s difficult scaling system, shot back with it’s own, much lower, rating. “This whole Puerto Rico thing is not even in the Best New Album category. It’s like a 6.5. At best,” says lone Pitchfork female senior editor, Cassie Roosevelt.

For those who don’t know, (eye roll emoji) Pitchfork is a music reviewing website known to review albums and musicians with a scaling system that is completely arbitrary. For an album or work to get a score of a 10, that’s a pretty big deal. Few albums have received such high ratings. “To get a 10 you have to meet a lot of intense qualifications. Was the album created by a man?” Here, Ms. Roosevelt stops to think for a long period before moving forward. “Actually that’s the only qualification”, finishes Roosevelt.

But as far as Trump’s work in Puerto Rico is concerned, Pitchfork doesn’t even believe it would fall under the Best New Album category. As a Best New Album, or BNA, would have to receive an 8 or higher. “Did Trump go to Puerto Rico? Yes. Did he hand out paper towels? Yes. Those are points in his favor. Did Puerto Ricans have to drink water from a hazardous waste site? Yes. That’s going to knock him down some points. He’s miles away from a BNA.” Roosevelt states.

And while Trump is a man, which gave him eight points right off the top, the possible death of 450 Puerto Ricans really lowered his score.  Says Roosevelt, “It’s like that weird pan flute in the Arcade Fire single this summer. Like, why? You guys really had a good thing going and then you fucked it all up with that derivative pan flute. Those deaths are also soooo derivative of the FEMA fuck ups from Katrina. Like come on.”

Derivative or not, giving any sort of passing grade to yourself, while people are dying due to your inherent racism, seems gross and horrific. But as far as Trump’s concerned, it probably IS the best work he’s done since taking office. Huh. With that in mind, Trump’s rating scale actually makes more sense than Pitchfork’s.